The Walking Dead Spoilers Season 5 – Is the Brutality Too Much? 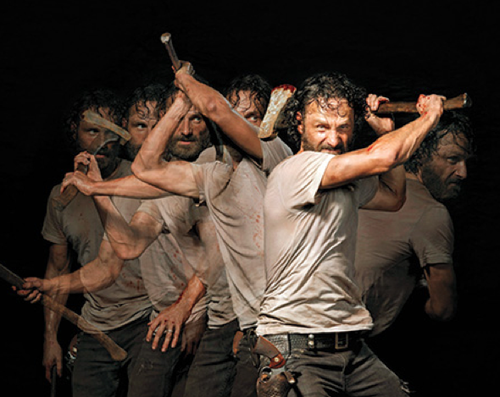 The Walking Dead Season 5 Spoilers predicted a killer season with more zombie and human brutality than ever before and they weren’t kidding. Wow! Season 5 of The Walking Dead hit the ground running and has taken us for a ride in just the first 3 episodes. There have been grumblings on the Internet about this season’s brutality and perhaps those have been justified.

Let’s take a look: So far, we’ve seen people lined up like cattle in a slaughterhouse, their heads bashed and throats slashed as they are left to bleed out into a trough. The purpose of that slaughter was your basic cannibalism. The zombie attacks on TWD have gotten even a little more disgusting (remember the zombie eating the guy’s face in Terminus?), and of course there are cannibals. We were shocked (or maybe not, if you read the comics) by the Bob menu at the end of episode two. Episode 3 brought a bloodbath of epic proportions, in all places, a church.

Has The Walking Dead gone too far? Perhaps, perhaps not. The brutality portrayed in the comics is worse, but in the television series we’re seeing it in moving, living color.

First of all, The Walking Dead isn’t a kid’s show. It’s popularity has grown to unbelievable proportions, but it’s not a show for every audience. Parents need to keep that in mind before allowing little Billy to just plop down and watch.

Second, the subject matter isn’t pretty. There’s no doubt that if the zombie apocalypse happened tomorrow, a year from now, many of us might have a whole baggage of things we wish we hadn’t needed to do. It’s a brutal world in TWD universe.

Ultimately, the television series is about survival and the lengths people are forced to go to in order to survive and endure. It isn’t a rainbows and ponies kind of world anymore.

Perhaps some of the things that are actually shown don’t need to be shown. For example, we know zombies eat people. We don’t really need to see it. On the opposite side, we all understand the concept of cannibalism, but seeing it in stark reality (a butchered guy on a slab, for instance) sent the message home that this was serious business and these people weren’t playing games. Thankfully, we didn’t have to watch them remove and prepare Bob’s leg.

Yes, The Walking Dead is especially brutal this season. It may even be a little on the too-graphic side of things. It’s the world the characters are living in now, though. So it’s hard to say if it is too much. If you feel the need to turn your head, go ahead. Don’t let your kids sit and watch. Set the show to record on your DVR so you can fast forward when it gets ugly. Just keep in mind, that if the world goes to pot, this might be our reality. Hmmm, food for thought. No pun intended. Tune in Tomorrow for more CDL The Walking Dead season 5 spoilers!