The Walking Dead Season 5 Spoilers: Will Rick and Crew Make It To The Alexandria Safe-Zone? 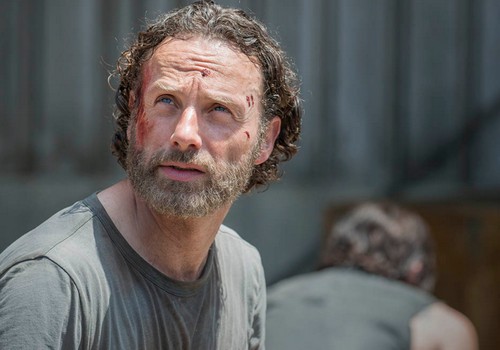 The Walking Dead season 5 spoilers address the question of whether or not Rick and his group of survivors will make it to the Alexandria Safe-Zone. In The Walking Dead graphic novels, Rick Grimes and his group of survivors make it to Alexandra, Virginia — which is known as Alexandria Safe-Zone. Will this safe community become a part of season 5 on the television series?

There have been hints that this could be the case. In the comics, Alexandria Safe-Zone is located just a few miles outside of Washington D.C. In the television series, part of the group has set out for Washington D.C. and the other part is planning to follow.

If you watched The Walking Dead November 2 episode 4, “Slabtown,” you may have caught something that new character Noah said. He mentioned that he came from Richmond (Virginia) and that there is a wall for protection there. In the comics, Alexandria Safe-Zone is a community with a wall built around it, so perhaps Richmond is the television version of Alexandria.

If you remember Woodbury, it too was a safe community with a surrounding wall. The idea of Woodbury was a good one — an enclosed community that is thriving and self-sustaining. The reason Woodbury ended up the way it did, though, was because of psychotic leadership. The Governor was a madman and his rules of order ended up destroying the town.

Will this season bring us Woodbury part two with a version of the Alexandria Safe-Zone?

Rick Grimes just wants a place to call home. He wants a safe location to settle and feel secure so he can live and let live — so to speak. Hershel’s farm was a wonderful place of safety, and the prison was a good location and worked well for awhile. Now that the group is out roaming again, though, is there another safe location for them?

Since we know from experience, even good things have bad stuff, we can expect a place of safety to be part of this season’s storyline, but there’s no guarantee how long it will last. In the comics, there was plenty of drama and even wars going on in Alexandria Safe-Zone — but it was largely safe from the constant threat of walkers.

Currently, as part of the group is heading toward D.C., and we expect the other part of the group to head toward Atlanta for a confrontation and rescue at Grady Memorial Hospital, a place of safety may have to be left for the last half of the season. Internet rumors hold that yes, Alexandria Safe-Zone will be part of season 5, but we have no idea how much, or if the location will be a larger part in the upcoming season 6.

Yes, AMC renewed The Walking Dead for season 6 so we will definitely have at least one more season to follow Rick and crew. For more The Walking Dead season 5 spoilers come back to CDL tomorrow and every day!