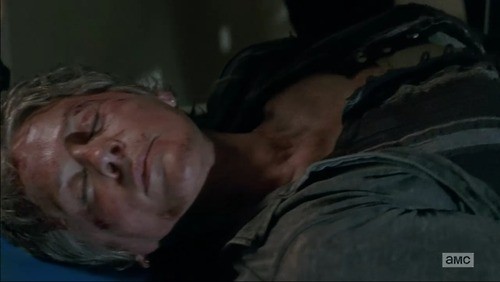 We saw Carol at the end of the last episode, “Slabtown,” being wheeled into Grady Memorial Hospital on a gurney. It’s easy to make the assumption that she was “rescuenapped” by the Grady cronies. She appeared to be unconscious, but Daryl was not with her.

We know that Daryl and Carol were about to follow one of the cross-marked vehicles similar to the one that took Beth in season four, so it’s a safe assumption that they did so and ended up in Atlanta. What happened between then and when Daryl ended up back at St. Sarah’s Church and Carol ended up as one of Grady’s victim-slaves, we don’t yet know.

So let’s make a few guesses.

Supposedly, if all the Internet buzz holds true, we will discover the events that took place with Carol and Daryl during the November 16 episode. This week’s The Walking Dead episode 5 “Self-Help” is supposed to follow the group traveling to Washington D.C. (Abraham, Rosita, Eugene, Tara, Maggie, and Glenn) and TWD spoilers suggest Rosita dies.

Here’s a few scenarios (partially based upon Internet rumors):

Scenario 1: Carol and Daryl followed the vehicle into Atlanta. They discovered what was going on at Grady or at least that Beth was being held against her will. They run into Noah who tells them more about the goings on inside the hospital and offers information about how to rescue Beth. Daryl and Noah set out to call in the troops from St. Sarah’s Church and return to Atlanta. In the meantime, Carol fakes an injury to gain entry to Grady Memorial Hospital.

Scenario 2: While in Atlanta, Carol is injured (buzz on the web is that she is hit by a car — presumably a vehicle from the hospital since there aren’t too many other cars roaming around) and whisked away. Daryl runs into Noah who explains the danger Carol is in while inside the hospital and Daryl and Noah return to St. Sarah’s to gather Rick and company to rescue Carol.

Scenario 3: Carol and Daryl follow the vehicle to Atlanta and encounter the cops from Grady Memorial. They get into a confrontation with the cops and the result is Carol being intentionally hit by the driver of the cross-marked vehicle. She is taken by the cops and Daryl must return to St. Sarah’s to gather Rick and the others to help rescue her. Along the way he runs into Morgan and Morgan is the mystery person in the woods with Daryl.

All three scenarios are plausible, but perhaps not a one is correct. It’s hard to guess with The Walking Dead. Your only choice so far this season is to hold on tight because it’s certainly a wild ride. We shall find out soon enough.