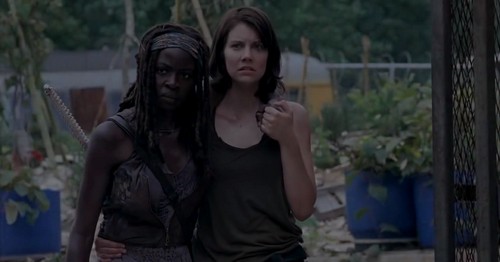 Perhaps the toughest bad ass lady so far is proving to be Carol. During the early seasons of the show, she seemed helpless and many of us probably thought she was a background character who would be killed off soon enough.

In season 4, though, she began to show us her leadership qualities. She became an important part of the inner circle of leadership at the prison and in the last half, she made some hard choices that none of us would ever want to make. She started off season five with a bang — literally — and she is now at the top of the strong women in the series.

We haven’t been able to learn a great deal about Michonne, but we know enough to realize this lady has walked through Hell and survived. When it comes to the ladies of The Walking Dead, Michonne is definitely one you want on your team. Heck, she stood up to The Governor and even cost him an eye. That says a great deal right there about her.

Like Carol, Maggie has shown a great progression of character since her first introduction. In season two, many of us though Maggie was a weak character who wouldn’t last. She proved everyone wrong and in fact, has become one of the strongest characters — male or female — in the show. Maggie has proven that she has what it takes to survive in this crazy, new zombie world.

Beth is perhaps one of the most surprising characters in The Walking Dead. When introduced in season two, she was meek and weak. Admit it — you probably thought she would be gone before season two ended. She tried to commit suicide in season two because she couldn’t deal with the reality of the zombie apocalypse once she and the rest of the Greene family realized that walkers are not sick and afflicted versions of the people they once were, that those people were in fact dead.

Fast forward to season four and we began to see a toughness that we never expected in Beth. Now, in season five, she is proving that maybe she really can survive on her own. Too bad we know she dies in the mid-season finale of The Walking Dead season 5.

We know little about Tara. When introduced with her sister, father, and niece, she put on a very tough act. Following the aftermath of the prison attack, though, Tara showed a vulnerability that is actually quite endearing and a strength of character that has to be admired. Tara is a minor character, which means she could be gone at any time, but for now, she is a woman worth paying attention to.

Be watching these ladies as they continue to fight the living and the dead. Tune in every day to CDL for new The Walking Dead season 5 spoilers.