The Walking Dead Season 5 Spoilers: What Clues Told Us Eugene Was Lying? 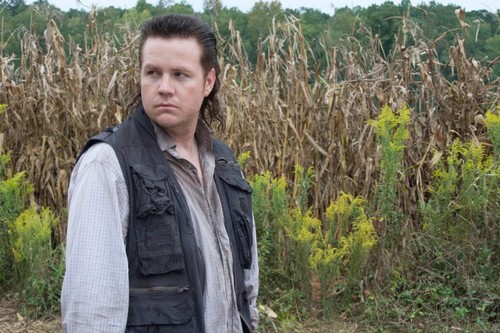 The Walking Dead season 5 spoilers address the issue of Eugene lying and how we should have known – as well as what this odd character hold for the future of TWD and our survivors. So who didn’t have an inkling that Eugene was a liar? Not a lot of hands raised, certainly. Since the end of season 4 of The Walking Dead, we’ve been told that the mullet man was Dr. Eugene Porter and he knew what caused the zombie virus and also how to stop it. In episode 5 “Self Help” of The Walking Dead season 5 we learned lots more and it was nothing nice!

When pressed for explanations (and hey, who wouldn’t be asking him to explain?) he was appropriately vague and condescending. After all, why should his brilliance explain the complexities of the zombie virus to such unwashed masses?

It was all a giant load of BS, and even if you didn’t know this was the case by reading the comics, it wasn’t hard to figure out. Here were a few clues:

Eugene refused to talk about it

Scammers generally deal in redirection and double talk. Eugene was good at that. Every time he would be pressed for an explanation — any explanation — he would hedge. He would start spouting some confusing babble that sounded really smart but was really meant to distract and confuse and stop the person from pressing him even more.

He would often reply with something along the lines of “you wouldn’t understand.” There ya go! Typical scammer baloney — don’t explain, just blow the person off so you don’t have to explain.

Seriously, though, if you knew what caused the outbreak, wouldn’t you be telling someone? I certainly would be. I wouldn’t care if they could understand my explanation or not, but I would want to talk about it.

During the last episode of season 4, we finally got a bit of an answer from Eugene. Remember when all of our survivors were locked into the train car at Terminus? Eugene was asked about his miracle cure and was basically told that unless he could provide a tidbit of information to prove he knew what he was talking about, that his safety wouldn’t be guaranteed.

What was his answer? It was some vague babble with big words thrown in but in essence, it told us nothing.

Were the others fooled?

Yeah, I don’t think the others were completely fooled by Eugene. Abraham was obviously on board 100 percent, and Bob talked like he believed in Eugene, but everyone else? Eh, they all seem to be regarding Eugene in the same way we look at that crazy uncle we all have. “Oh him? He’s harmless, just nod and smile and let him go on his rant. He’ll leave you alone after that.”

Nobody except Abraham really seemed too impressed with Eugene or with the supposed cure he offered.

Eugene’s lie is a testament to the extremes people will go to for survival. He did something good though: Remember when he misled Rosita into driving to the spot he expected Glenn and Tara to emerge from the tunnel? His action resulted in their rescue, so Eugene may not be all bad — just a con artist with a terrible haircut. Tune in tomorrow for more The Walking Dead season 5 spoilers!