The Walking Dead Spoilers: Is Season 5 The Grossest and Goriest Yet? 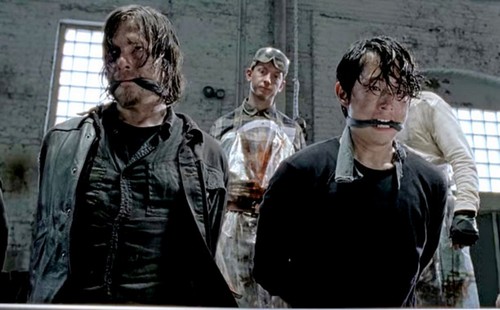 The Walking Dead season 5 spoilers tell us that the show hit the ground running at full speed on the gross scale. From cannibalism (and slaughterhouse tactics — who can forget that trough in episode one?) and Bob a la carte, to that slaughter in St. Sarah’s Church, all the way to the wire saw removal of Joan’s arm in Sunday Nov. 2 episode 4 “Slabtown” — it’s pretty darn gory this season. We’re in the midst of the zombie apocalypse. Sure, it’s messy. We expect that. But. Big but, there.

Are the writers in The Walking Dead season 5 looking to up the gore factor on purpose or have we just progressed to an era in the show in which anything goes? Is the added blood and guts and ick so far in season just a natural progression to what it might really be like so far into a zombie apocalypse?

We got a taste of the coming gore (no pun intended) toward the end of season four when an enraged Rick ripped out a man’s throat as he sought to protect Carl. That was pretty gross, but did we have any clue it would only get worse?

But. There’s that big but once again.

Do we really need to see everything? Sometimes not seeing is more effective, and it’s possible TWD writers have forgotten this. Remember “Paranormal Activity?” It was much creepier to not see what was happening and just use our imaginations.

While TWD has had four seasons with amazing storylines that delved into humanity during crisis and human nature when in survival mode, season five seems to be hitting hard on the idea of “Let’s bombard them with lots of gross stuff” instead of “Let’s tell a compelling story.”

Don’t misunderstand: The storyline in this season of TWD is still interesting. It’s taking us places. It’s delving into some areas that we never thought we would go. I mean, cannibalism? Who ever thought about a television series that dealt with apocalypse survivors feasting on long pork?

Hmmm, we can only wait and see what happens next. Our intrepid crew’s next challenge may be dealing with the evil hospital, but if things go as they have in the first few episodes of the season, we can expect to see a lot more blood, gore, and ickiness that isn’t necessarily zombie-related.

So far, we’ve seen a lot of people blood and injury. We expect to see plenty of zombie munching and zombie splattering. There hasn’t been so much of that so far. Let’s see more exploding zombie heads and less human carnage. How about it TWD writers? Can you give us a hand here?

Oops, poor choice of words. Tune in to CDL tomorrow for another The Walking Dead season 5 spoilers post!