The Walking Dead Spoilers Season 5: Beth and Carol at Grady Memorial Hospital, Is it Really a Bad Place? 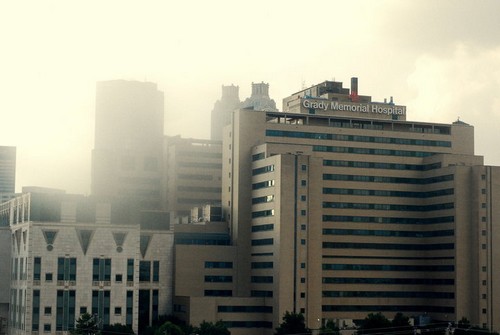 The Walking Dead season 5 spoilers examine the true nature of Brady Memorial Hospital where Beth and Carol are being held and what to expect. TWD episode 5 “Self Help” will teach us more about what is really going on in at this rather Procrustean hospital – hey, at least they don’t eat people! So now we know what happened to Beth — or at least the circumstances behind her kidnapping. If you watched Sunday night’s The Walking Dead “Slabtown” episode 4 , you learned plenty.

We know that Beth was “rescued” by a couple of “cops” and taken to Grady Memorial Hospital in Atlanta. The setup is simple: They “rescue” people, treat their wounds, if they’re salvageable, they put the rescued people to work as indentured servants. For the women, that can include providing certain favors to the male cops.

All of this is overseen by a former cop named Dawn Lerner. She’s the one in charge — sort of — and she calls the shots.

It is easy to see that Grady Memorial is probably going to be the site of a conflict with our group of prison survivors. At the end of “Slabtown,” we saw Carol being wheeled in — an apparent rescue. We hope they give her a chance, because any that don’t seem to be in good enough shape to save are cut loose — quite literally, down an elevator shaft.

While the personnel at the hospital and the situation itself are not good, it doesn’t exactly seem to be the evil and terrifying place that our friends have encountered in the past (Terminus, Woodbury).

As a bad guy, Dawn seems more confused than evil. It’s understandable that she is trying to maintain order and rules in order to make the microcosm of Grady work. but she isn’t the iron-fisted tyrant that ruled with fear and even terror that we saw in The Governor.

All in all, if you’re a big fan of Beth Greene as a character, then “Slabtown” was an interesting one. We got to see what’s been going on with Beth, and we found another pocket of survivors. The shenanigans at Grady Memorial are just another showcase for the things humans will do to survive.

We saw a doctor and police officers who were all once sworn to protect, serve, and do no harm, doing the exact opposite.

This episode was not on par with previous weeks of The Walking Dead, but we learned a few things. Grady doesn’t bring the sense of dread that we felt at Terminus. At Woodbury, before we even saw The Governor’s aquarium heads, we could sense that something wasn’t quite right.

If the idea was to make us all feel an underlying element of terror and fear for Beth, “Slabtown” fell a little short. Dawn seemed to be more mixed up than maniacal and Dr. Edwards even evoked some sympathy despite his murderous inclinations.

We got to see the one really creepy bad guy (Gorman) get his just desserts, so what’s next? We were left with the cliffhanger involving Carol, so we know it’s not over with Grady Memorial Hospital.

Let’s just shrug our shoulders and sit back to see what happens next.