The Walking Dead Spoilers Season 5: Less About Zombies So Far, Episode 4 ‘Slabtown’ Changes All That? 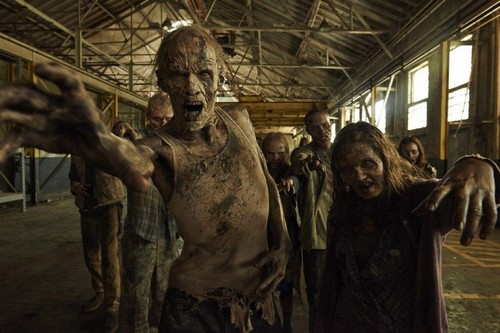 The Walking Dead season 5 spoilers show that up until episode 4, ‘Slabtown,’ the TWD is less about zombies and more about human drama and violence. So far, season 5 of The Walking Dead has shown us a lot of brutality. We’ve seen plenty of blood and violence — maybe more than necessary — but most of it has been at the hands of people. Does it seem as though those walking dead corpses have just become an afterthought?

Sure, it’s the midst of the zombie apocalypse, but one of the things that has made The Walking Dead so popular among fans is the fact that it is much more than just a “typical zombie movie.” The zombies have been quite realistic and if you’ve noticed, they have become much more degraded and disgusting over the seasons. Who can forget that traumatizing stuck-in-the-well zombie?

With The Walking Dead season 5, so far, though, we haven’t seen a lot of zombies. In previous seasons, the zombies caused all sorts of chaos and wreaked plenty of havoc. This season, though, they seem to be more of an annoyance. “Go away zombie! You’re bothering me while I deal with deep human stuff” almost seems to be the prevailing attitude regarding those walkers.

Survival has become the greatest goal and Rick Grimes is a perfect example of the spiral downward. At the beginning of the series, Rick was a cop and was serious about his commitment to upholding the law and seeking justice. He made a lot of decisions that were filled with compassion and a desire to do “the right thing.”

We loved him for it. Season four saw a switch-up for Rick, though. He has now adopted the “kill or be killed” agenda and that cop who wanted to do the right thing seems to be long gone.

In earlier seasons, those walkers who would show up at any moment were the things that our heroes feared and watched out for. Now, they dispatch them without a second thought, but the living people are the ones that make them wary and fearful.

The Walking Dead makeup and special effects team is top notch and those walkers are amazing to see. Really, though, haven’t we just gotten used to not even noticing them? It’s certainly much easier to spot the threats when they are un-dead and harder to tell if the humans can be trusted or not. Tune in for more cdl The Walking Dead season 5 spoilers tomorrow!