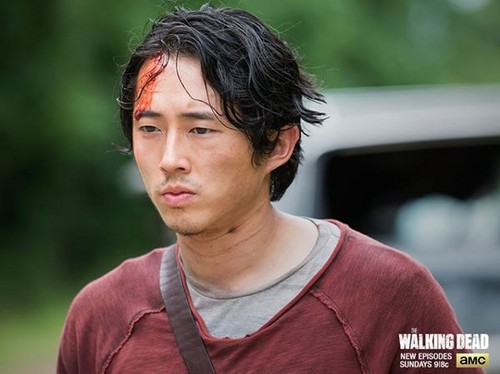 The Walking Dead continues on AMC tonight with all its gory goodness with an all new Sunday November 9, Season 5 episode 5 called “Self Help”. Tonight, the group must contend with a new set of issues while out on a mission.  Meanwhile, will Glenn [Steven Yeun] and Maggie [Lauren Cohan] make it to DC?

On the last episode, things appeared safe and nice, but there was a bit of a dark side for another group of survivors.  At the hospital, Beth confronted Edwards about deliberately using her to kill Trevitt, another doctor, who would have threatened his position in the hospital. As she prepared to kill Edwards in the hallway, she sees an unconscious Carol brought in a stretcher. Did you watch the last episode? If you missed it, we have a full and detailed recap right here for you.

On tonight’s episode as per the AMC’s synopsis, “While on a mission, the group is confronted by new problems that test their ability to survive.”

You aren’t going to want to miss any of the unfolding action tonight. We’ll be recapping the season 5 episode 5 live right here for you at 9pm. In the meantime, hit up the comments and tell us what you’re expecting from Season 5.

Abraham is driving the bus and Rosita mentions he needs a hair cut, Terra makes a joke out of Eugene’s mullet and he says he’s only focused on reaching D.C. as fast as possible. Maggie looks at Glenn and mentions that maybe Rick and the others are right behind them; Glenn assure her they will surely catch up. Glenn asks Eugene why his hair is like that, Eugene says he loves it and no one will ever touch it with clippers. All of a sudden the bus pops a tire and flips over, all the walkers near by start making their way over to the bus.

We now see Abraham beating someone to death with a can, he then steps on his neck and breaks it. Abraham killed a bunch of people in a grocery store, he now wakes up in the bus yelling for Eugene. Abraham and Glenn decide to hold them off as the others make a run for it; Terra kills a walker and tells Eugene to hurry up and escape. Eugene is watching the group kill all the walkers and he has a terrified look on his face; but he goes ahead and saves Terra by stabbing one sneaking up on her. Abraham makes sure that Eugene is fine and realizes his wound on his hand opened up; Maggie offers to find medical supplies on the bus but it sets on fire losing everything inside. Eugene says that they can just head back instead without the bus, Abraham tells them there is no running back only forward; Glenn asks him if he is okay. Eugene walks over to a walker and spits on it, Rosita tells him to hurry up and catch up with the others.

We now see Abraham in the grocery store looking for Ellen, but now we’re back to the group. Glenn and the group are now in a library, they barricading the doors and making a fire with burning the pages in books. Rosita is stitching up Abraham’s hand. Abraham thanks Glenn for coming with him to D.C. still after the bus crash, Glenn tells him he doesn’t break a promise. Abraham says it’s at the point where everyone alive now is strong or else they wouldn’t be alive. Abraham and Rosita start going at it together on a table, Terra tells Eugene to go away from them. Terra thanks Eugene for saving her; Eugene says the bus crashed because of him. He wanted the bus to stop and have them go back. Terra asks him why he did that, Terra tells him he messed up and not tell anyone about or do something like it again.

Glenn gives Maggie a kiss and the two hug, Abraham is standing watch at the window just staring at the walkers passing by again.

We now see Abraham  back in the grocery store telling the girl and two kids that they are safe now, they don’t have to be scared now but they look terrified of him. We now see Rosita mending Abraham’s hand; she mentions that they should stay the day but Abraham says he wants to keep moving. Abraham decides that the group is going to move on, though is headed over to check on a fire truck. Abraham gets it started and all of a sudden it stops on him. Abraham gets out  and then a bunch of walkers come out; the group start killing them all. Eugene gets on top of the fire truck and uses the house to kick them all down; Abraham is very impressed by it. Abraham gets on top of the fire truck and starts laughing.

Abraham wakes up in the grocery store and realizes that Ellen and the two kids are gone; now we’re back to Abraham trying to fix the fire truck again in the middle of nowhere. Maggie tells Eugene the she likes his hair too and knows he likes it for a reason; she believes nobody knows who he wants to be. She tells him he is not like everyone else, Glenn says the wind is picking up and they’ll smell something gross. Abraham says they wont stop, they being moving on foot. Up ahead is tons of walkers, they want to go the other way but Abraham tells them to hold up and refuses to take a detour; Glenn tells him that this is not something they can get through. Abraham tells him that they can’t go back, Rosita says that the others are right and he’s just being stubborn. Abraham moves back and starts dragging Eugene with him, Glenn goes over to stop him; Eugene yells at him and says he lied. He is not a scientist and he doesn’t know how to stop all this.

Eugene says that he just knows things, but he is no scientist. He knows he’s smarter than others and is a good liar; he just needed to get to D.C. and he knows that it’s the best place for survival. Thinking if he could get people to get him there it will be fine, Rosita says people died to get him there. Eugene says he knows this and confesses what he did to slow down their roll. He admits that he is screwed either way whether he confessed or not, he confesses he’s smarter than them and that he knows they will leave him there; Abraham beats him up and slug him in the face several times. Abraham sees his bloody hand and stops; Eugene’s face is completely swollen and bleeding, Abraham gets on his knees sees back into the past where he found Ellen and the kids dead. We now see where Abraham first met Eugene.