The Walking Dead Season 5 Spoilers – Will Carol Die in Midseason Finale Instead of Beth? 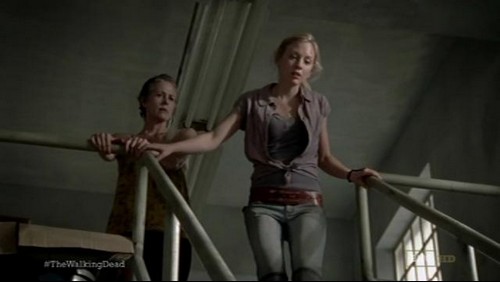 The Walking Dead Season 5 spoilers for episodes 7 and 8, the midseason finale, look at who dies and who doesn’t – most especially Beth and Carol. We explore the hypothesis that Carol rather then Beth dies escaping Brady Memorial Hospital! As last night’s episode 6 of The Walking Dead “Consumed” (recap here) went off the air, we were left with very little information about the status of Carol and Beth. We know Carol was hit by the car and taken, and from previous episodes we know that Beth has been captured trying to escape and is in the clutches of Grady’s finest. We also now know that Daryl and Noah are headed back to the group to round up the posse.

With an impending showdown between the group and the hospital, who is going to actually kick the bucket? Generally speaking, such a large story arc will have to have at least one or two sacrificial lambs. Somebody is bound to die in The Walking Dead season 5 midseason finale. Who is the most likely? Let’s take a look at the two major suspects:

Beth is the name that keeps getting brought up and certainly could be the one to go. Many fans of the show are hoping for a swerve though. The Walking Dead is known for going one way when we think they are going another. Despite this, Beth seems to be a likely option. She has been absent and the story would continue on undeterred. The death would also provide the show with a ton of dramatic options. Her relationship with Maggie, Daryl and others will make losing her a very big deal. Look for Beth to die as the most likely option.

Beth would be missed a great deal and personally I would be very sad to see her go. She is a light amongst nothing but darkness. Her and Maggie both seem to almost carry on their Daddy’s legacy on the show and that would be greatly missed if either of them were taken off the show. Herschel brought humanity to the show and his daughters both share that quality. Keep them around a bit longer at least!

Carol is another possible death but hers makes far less sense. For one thing, Carol dying would severely weaken the group and kill off many of the more popular story arcs. Despite the show seemingly resisting, a large part of the fan base still wants her and Daryl to end up together. Killing her off would nullify those discussions and take a very important character off the show.

Carol also seems like she has an unfinished story. They could always go back and tell the story through flashbacks, but that seems unnecessary at this point. Killing off Carol is probably the wrong move at this point in the series.

Either one of these ladies could end up dead and it is always a possibility that they both could. Never say never with The Walking Dead, right? That said, both Carol and Beth might end up safe and someone else entirely could end up dead. Nobody really knows at this point and that is what makes the show so awesome.

Which characters do you think should be killed off and why? Join us tomorrow for another The Walking Dead season 5 spoilers post!