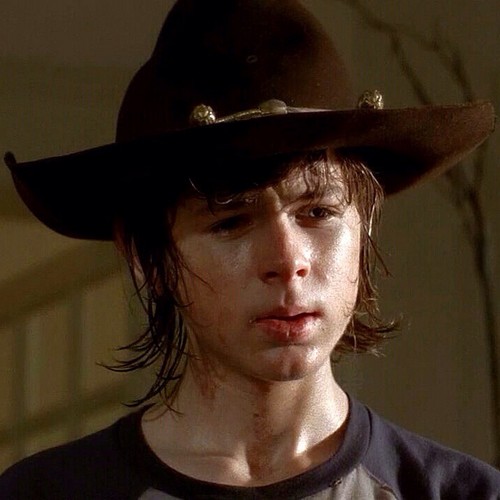 We have been watching Carl Grimes [Chandler Riggs] grow up quickly over the first four seasons of The Walking Dead. Now, here comes The Walking Dead season 5 and it looks like he’s going to have to man up even more. Here are five things we hope happen for Carl this season.

Survive Terminus – Okay, of course we hope that first of all Carl survives Terminus. Carl is one of those characters that you could see getting killed off, because he’s an integral part of the story. Let’s hope the writers keep Carl on so we can watch him develop some more depth and grit.

Work Out His Issues With His Dad – Carl has issues. His father, Rick, has issues. They have issues in their relationship. Now, perhaps watching his dad rip out a guy’s throat to save him (Carl) from some pretty horrible things may have helped the relationship a bit. Carl can’t deny that his dad cares now. And he can’t think that his dad is a coward. I mean, seriously. We need to see these two work out whatever is going on between them. Maybe Carl is blaming Rick for the loss of his mother, or the loss of baby Judith. Maybe Carl thinks Rick should have done more to protect the prison. Who knows? Whatever is going on, Carl needs to get it worked out and move on.

Develop Some Maturity –  Carl is a kid. He has the attitude and maturity of a kid. He’s living in an apocalyptic world now, so it’s time he developed some maturity. Carl’s instability may be due to immaturity, but we need to see Carl grow in character.

Begin to Show Real Leadership Skills – Carl is obviously a next generation leader in the world of the zombie apocalypse. It’s time for him to start developing those leadership skills. We’ve seen him do some pretty dumb things over the last four seasons, but it’s time to see him making wise decisions and exhibiting qualities that a good leader — like his father — have.

Eat More Pudding – Who didn’t love watching Carl sit and eat an entire, massive can of pudding in season four? It was a great reminder that no matter what is happening around us (zombies, death, destruction), that we should savor the small things. We need to see Carl eat more pudding. Oh, maybe not literally, but figuratively. Pudding is great, but we need to see Carl appreciate and enjoy some small spots of joy in the midst of this mess.

Whatever happens to Carl this season on TWD, we will be watching. Let’s hope he makes it all the way through this season so we can watch him develop and grow into a young man of integrity and quality. Keep checking CDL for more The Walking Dead season 5 spoilers!