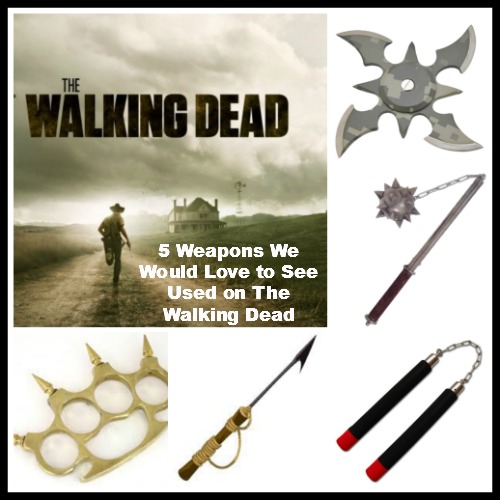 Diehard fans of The Walking Dead know that killing zombies is a sport. Disgusting as it may be, the writers have to sit around coming up with new and improved ways of dispatching the creatures that only die when you go upside the old noggin. Having watched four seasons of The Walking Dead and getting ready for a fifth, I have done some creative thinking of my own. Here are five weapons that would be interesting to see used on zombies in the Walking Dead Season Five:

A Harpoon –  Harpoons are simply cool and they are fairly well put together for killing zombies. In fact, when you have a large number of zombies in a crowd, you could actually shoot several in one take. How cool would that be? You reach back, let fly, and harpoon six zombies through the head! Good times!

Nunchuks –  Who would not want to see these in the hands of an expert? Some well placed nunchuks to the head would do wonders towards wiping out zombies in the tight spaces of the woods. I can see Michonne carrying these or even let a new character come on scene that is well versed in the martial arts. Imagine Jackie Chan taking on these sissy zombies….now that would be entertainment.

The Morning Star –  This club like weapon was popular back in the day due to the accuracy it allowed. When you put a number of long spikes sticking out of a long club, it is tough to miss what you swing at. Zombies would have no chance against this medieval weapon. Unique and powerful, it would take them out in droves in the hands of a powerful and driven handler.

Spiked Knuckles –  Again, these are up close and personal but highly effective. The only downside to these are that zombies would have to get fairly close to be killed. That is kind of the point of a suspense filled zombie series though, right? Up close and personal is best. Spiked knuckles could allow for some very dramatic close calls and a wonderful fight sequence. Sounds like a recipe for Walking Dead success to me!

Throwing Stars –  Again with the martial arts stuff, right? Still, can you imagine someone nailing these zombies from a good distance with a selection of throwing stars? You could pick them off silently and at your leisure from a safe distance away. Unlike bullets, they would never run out. They make no noise and they are powerful enough to do the job when you become accurate with them.