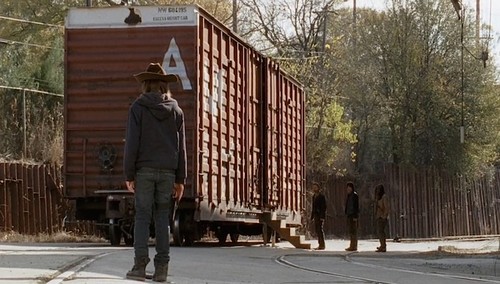 The Walking Dead‘s Season finale last Sunday began with a bag but ended with a whimper. However, we end on a huge cliffhanger for Season 5: what is Terminus?

We were already questioning the validity and legitimacy of Terminus through the past few episodes, as all our separate groups started converging onto the train tracks to head towards the too-good-to-be-true sanctuary. And alas, it was too good to be true.

While we don’t see what happens to Glenn, Maggie, and co. immediately after they reach the entrance to Terminus during the last episode, we do see Rick, Michonne, Daryl, and Carl sneak up to Terminus from the side in a much smarter move. But then they throw away their smart decision-making by introducing themselves without waiting to see if these people are all crazy, a la the Governor. After all, Woodbury no doubt looked like a safe town to outsiders. It’s only when you get a closer look that the veil starts to lift.

Unfortunately, Rick and co. were too tired and emotionally worn to wait any longer, and in they went. At first, it seems like Terminus is everything that was promised. They get hot food served to them by one of the residents. Gareth, the mysterious leader, welcomes them into Terminus, promising them sanctuary so long as they don’t do ‘anything stupid‘. But Rick, noticing various things around the yard like Glenn’s Riot Gear, Hershel’s watch, and the group’s infamous poncho, quickly pulls a knife on a Terminus citizen.

Always the smart cop, Rick realized that his people had been here recently – and that these Terminus folks maybe weren’t to be trusted. What follows is an odd little gun battle where snipers from the roof lead Rick and co. on a merry chase on the compound without actually shooting them. During this chase, they come across a room lit with candles, and they hear screams from a woman trapped inside a room. Basically, these people be cray-cray.

Obviously, the logical conclusion would be that these people are cannibals. It explains why they’re so well-fed and healthy, and it would explain why they wouldn’t need to hunt so regularly. They just put up signs on the train tracks, and the food willingly walks into their camp. In every other way, they seem civilized – we see some of them washing clothes, we see them eating dinner (someone’s arm or leg perhaps, ew). But I’m sure Terminus would be hard-pressed to stay so organized if they started taking in many more new people, even if those people were palatable to the idea of cannibalism as a food source.

Either way, Rick and co. get locked in that weird shipping car, ‘Train Car A’, and his group gets reunited with Glenn and Maggie’s group. Happy news? Well, they’re still trapped in that train car – what’s in train car A? And they’re possibly about to be chopped up and barbecued for dinner. But when Rick gets all badass, it’s tough to argue with the man. Those cannibals are about to get SERVED.

What do you guys think? Are the Terminus citizens, including Gareth, all cannibals? Or are they something else? A creepy cult? A creepy cannibal cult? Let us know your thoughts in the comments below.