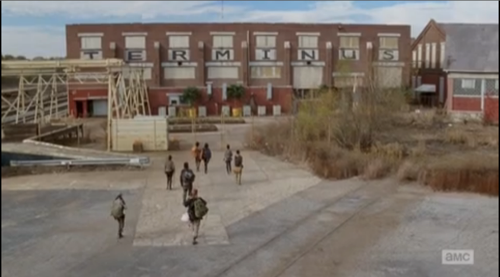 The Walking Dead spoilers show us that the TWD is ready to blast off a spin-off show. The Walking Dead ratings are continuing to get higher and higher, defying serialized drama trends. As such, AMC is fully capitalizing on the zombie craze and has come up with a Walking Dead ‘companion’ show. However, network sources have confirmed that while it’s being pitched as a companion show, this spin-off show will actually be a prequel, and will take place in Los Angeles during the ‘dawn of the zombie apocalypse’.

Now, those who watched The Walking Dead from the beginning know that we actually skipped over the beginning of the zombie apocalypse, with our protagonist Rick Grimes [Andrew Lincoln] walking up in a hospital weeks after the zombie threat had gone viral. However, this ‘companion’ show will likely deal with the immediate fallout of the zombie apocalypse, and how the world literally fell to pieces in the wake of the virus.

The show is currently titled ‘Cobalt’, although that could all change – and probably will. There are also many similarities to Cobalt and The Walking Dead, according to the Hollywood Reporter’s report on Cobalt’s story and characters. The lead character in Cobalt is very similar to Rick Grimes – his name is Sean Cabrera, and as per the Reporter’s bio, “Sean is a teacher who shares a son with his ex-wife, Andrea. The character is described as a good man trying to do right by everyone in his life.”

Obviously, the son plays a big role in the show as well, much as Carl Grimes does in The Walking Dead. It seems like this is our through-way into the world – caring about Sean and his son, and wanting them to survive. Of course, I’m not sure how long a show depicting the beginning of the zombie apocalypse is going to last, but since there are no comic-books to base this particular show on, I’m sure the writers will get creative with the world-building.