The Walking Dead Season 5 Spoilers: Who Is Morgan Jones And Why Has He Returned? 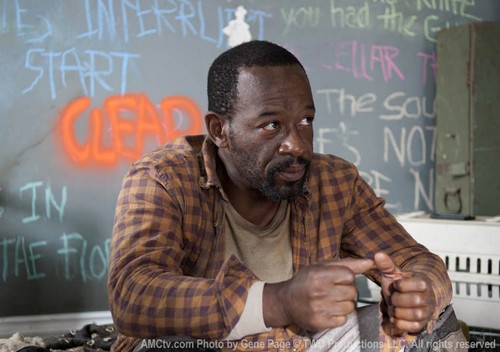 The Walking Dead season 5 spoilers are all trying to predict what will happen in the rest of the season. If you’ve been watching The Walking Dead since season one started, you certainly remember Morgan Jones (Lennie James). Morgan was the first person Rick Grimes encountered after awakening from his coma. Morgan was the first person who explained to Rick — and to us — what had happened as the world went to Hell. Now, in The Walking Dead season 5, Morgan is back, but little has been revealed about his purpose. What do we know about Morgan Jones?

Morgan is the only character besides Rick and Carl who has had a recurring role since the pilot episode in TWD Season 1. In the comic, Morgan’s zombie wife bit their son, Duane. Morgan couldn’t bring himself to put his only child down so he chained him up inside the house they were staying in. He fed Duane dogs and looters.

In The Walking Dead television series, we meet up with Morgan again in season three. During one episode, Rick, Carl, and Michonne return to Rick’s hometown to look for supplies and find a crazed Morgan has booby trapped the town. Morgan has had a mental break with reality after being forced to kill his wife after she bit his son, Duane. Morgan tells Rick that he had to put Duane down after he turned. Morgan’s fate is uncertain at the end of the episode as Rick and company leave him and it is assumed he won’t make it.

At the beginning of TWD season 5, Morgan is revealed to be following Rick. He appears to be lucid and have regained some of his sanity.

Morgan should not be underestimated. He is, after all, the one who taught Rick how to kill walkers. In season 1, Morgan showed a good grasp of morals despite the collapse around him. It is unknown if anything has changed about his morals and beliefs now.

It is assumed that after the encounter with Rick in season 3, that Morgan began to recapture his sanity and decided to set out looking for Rick. Creator Robert Kirkman has said that while it wasn’t seen in any episodes, the back story for Morgan holds that he came to his senses and left his safe haven in order to find Rick — the only living person he now knows. The back story continues that he tacked Rick to the prison where he arrived after the skirmish that sent the survivors fleeing. After that, Morgan saw the signs for Terminus and began making his way toward it.

It is uncertain how Morgan will meet up with Rick again, although there is speculation that Morgan will stay at St. Sarah’s Church for awhile and Rick will return to the church for an unknown reason. If Morgan meets up with the group, he will be a valuable ally and perhaps he will help Rick regain his moral compass.

The second half of season 5 is sure to reveal more about Morgan and likely bring him into Rick’s group of survivors. We can only wait and see when The Walking Dead returns in February. Check out our The Walking Dead season 5 spoilers here.