The Young and the Restless Spoilers: Adam Bonds With Chelsea and Connor, Joe Joins Forces With Victor, Nick Takes Dylan’s Side

BY Amanda Austin on December 14, 2014 | Comments: one comment
Related : Soap Opera, Spoiler, Television, The Young and the Restless 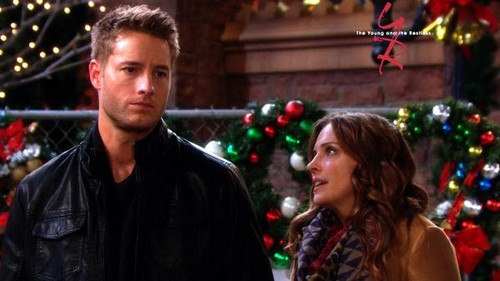 The Young and the Restless spoilers for Monday, December 15 tease another emotional and dramatic episode of the CBS soap. Please don’t forget to check out our “Best Soap Death of 2014” Poll! Rumors have been running rampant that Adam Newman/Gabriel would be back in Genoa City to reclaim his life any day now, and it could mean the end of Chelsea and Billy. And, judging from the Y&R spoilers for Monday’s episode, the rumors weren’t too far off. The Young and the Restless spoilers tease that on December 15 Adam tracks down Chelsea and Connor in the park and shares a moment with them before Billy arrives and interrupts them.

According to The Young and the Restless spoilers, Avery’s ex Joe Clark will have a powerful new ally in Genoa City, and on December 15 he begins negotiations with Victor Newman at the club. Joe’s day at the club isn’t a complete success though, he also learns that Avery and Dylan are engaged, and Nick Newman makes it very clear to the GC newbie that he will not be supporting him and is standing by his brother’s side. Meanwhile, Jill lectures Victor about getting involved in Joe’s controversial business deal and the effects it will have on Genoa City.

Stitch made a classic soap opera move and assumed Victoria was dumping him and got drunk and hooked up with another woman – only to learn the next day that he wasn’t single. The Young and the Restless spoilers for December 15 reveal that Victoria chooses to be with Stitch, and Stitch chooses to omit the details about his work relationship with Ashley and their hot and steamy shower.

So, Y&R fans, how much longer do you think Adam will be able to stand by and watch Chelsea and Billy? Is he going to blow his own cover because he wants his wife and son back? What do you think of Joe and Victor working together? How long until Victoria finds out that Stitch slept with Ashley? Let us know what you think in the comments below and don’t forget to check CDL tomorrow for more The Young and the Restless spoilers and news.