The Young and the Restless Need To Put Their Clothes Back, Bring Back Good Actors and Drop The Twitter Gimmicks 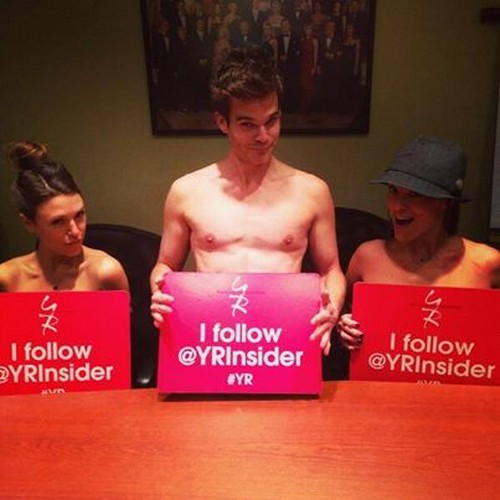 Can you smell the desperation in the air? It was permeating Twitter yesterday afternoon when three of The Young and the Restless’ stars decided to have a party on the social networking site. Liz Hendrickson, Claire Egan and Greg Rikaart were the first CBS daytime stars to decide to live tweet during yesterday afternoon’s episode of Y&R. That move in itself is probably a good one. We see major prime time stars live-tweeting through their shows each week and it’s a great way for the actors to really connect with the fans as the onscreen magic unfolds.

The problem here? They resorted to a desperate gimmick to get fans to join in the fun and once Y&R started trending then they lost their clothing! Viewers got a pic of the three stars naked from the waist up using signs that promote Y&R’s twitter feed to strategically hide themselves. Perhaps they were just trying to lightening things up but the attempt fell flat and amounted to just one more way that the shows’ viewers’ are being disrespected.

You guys have expressed outrage for weeks on end over bad casting, crushing cast changes and then story lines that are weak at best. Taking three and actors and using them to try and distract you from the real issues is an attempt to dumb down the core audience. Also did you notice that none of the longtime actors were getting naked on Twitter for the fun of it? Of course they weren’t and they won’t be during future Twitter parties. Even they will realize that the disgruntled fans are upset because they feel disconnected to characters that they once loved. They are at the very least needing to connect to the actors in a real way, not be distracted by them with goofy gimmicks. Were you a fan of Y&R’s first Twitter party? Tell us your thoughts in the comments below!