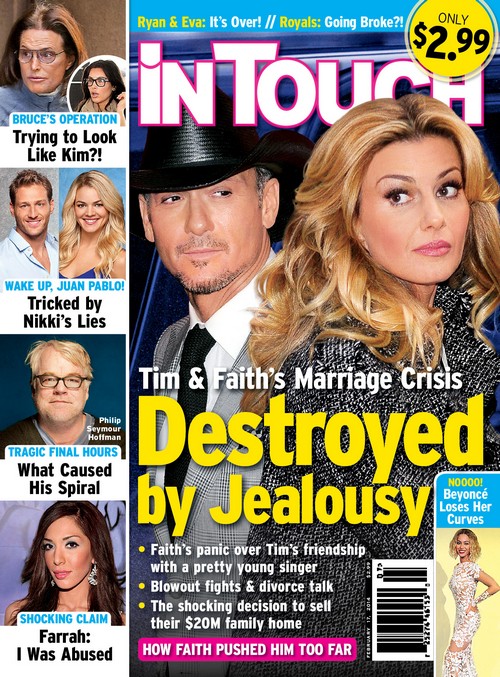 According to the latest cover issue of In Touch Weekly, Tim McGraw and Faith Hill’s marriage is seriously on the rocks, with divorce looking like the probable outcome. According to the report, Faith’s in a panic over Tim’s friendship with a ‘pretty young singer’, which has led to their ‘blowout fights’ and ‘divorce talk‘. They’ve also reportedly decided to sell their $20 million family home, which has shocked friends and family alike.

To sum it up, all is not well in Tim and Faith land, mostly due to Tim’s alleged affairs with younger women. We already know that Faith doesn’t trust Tim, at least according to the tabloids. However, if they were going to get divorced, wouldn’t they have done it by now? How many more women does Tim have to be linked to before Faith makes that call?

In Touch also has a report on Bruce Jenner‘s sex change plastic surgery, and in one of their more ridiculous claims, they allege that Bruce is trying to look more like Kim Kardashian. Um, if Bruce is spending that much money on reconstructive plastic surgery, you’d think he’d pick a more attractive person to look like, no?

There’s also a story on Philip Seymour Hoffman‘s final hours before his death, and what led to his shocking overdose on heroin. Unfortunately, as much as we can deduce and guess at his motivations, he has taken his secrets with him to the grave.

Finally, Farrah Abraham makes a shocking claim that she was the victim of abuse when she was younger, which might explain some of her issues. If it was anybody else, I’d be more inclined to believe them, but with Farrah, you never know when she’s doing things for attention and when she’s actually telling the truth.