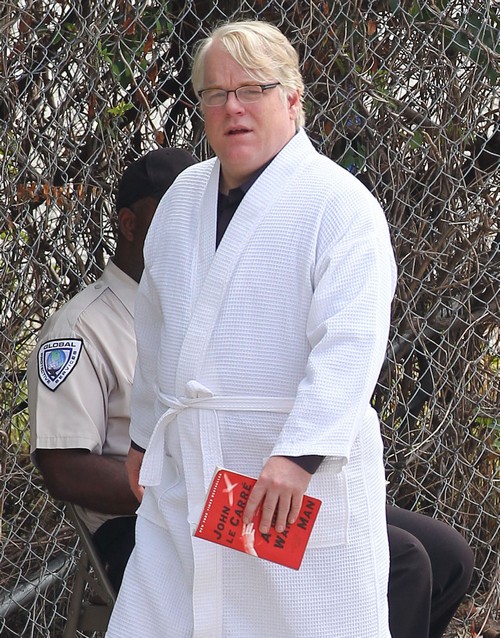 The tragic ending to the life of veteran actor Philip Seymour Hoffman, was marked by a hypodermic needle stuck in his arm as he lay alone, in his underwear. It wasn’t until 11:30 AM ETS when cops were called after Philip Seymour Hoffman’s personal assistant found him on the bathroom floor of his Greenwich apartment, which stands about three blocks away from the apartment the actor shared with girlfriend and mother of his three children, Mimi O’Donnell.

Police found heroin in the apartment, where PSH was said to have been shooting up in his bathroom. Those who saw the actor at a recent party for his upcoming movie, “God’s Pocket” described him as appearing “slightly disheveled and pasty,” as reported by the New York Post.

Likely at the urging of his longtime partner, costume designer Mimi O’Donnell, Philip Seymour Hoffman entered into rehab in 2013 for ten days after relapsing in 2012 after 23 years of sobriety.

Just three blocks from the home he and his girlfriend, costumer designer, Mimi O’Donnell shared, Philip Seymour Hoffman lie dead in nothing but his underwear and a hypodermic needle stuck in his arm after an apparent heroin overdose.

PSH was found by his personal assistant, who promptly called police to the Greenwich apartment, which was littered with heroin. The veteran actor has apparently been shooting up in the apartment’s bathroom.

The New York post reported that attendees of the Sundance Music Festival, taking place last month in Park City, Utah, described the actor as looking “slightly disheveled and pasty.” Despite realizing the severity of his 2012 relapse in which he snorted heroin for a week and was abusing prescription meds, and putting himself in rehab for 10 days in 2013, this battle proved to be too big a fight for him.