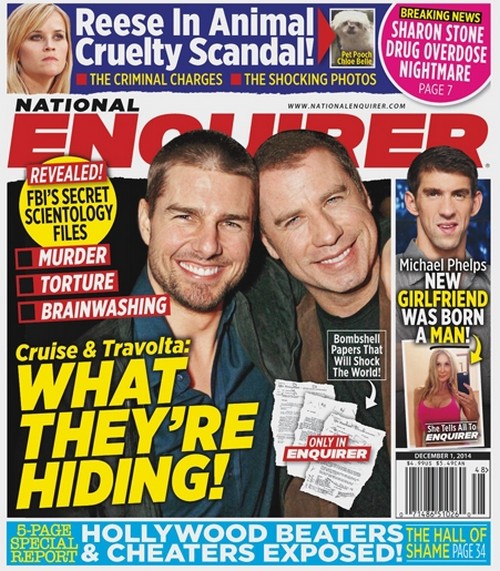 Tom Cruise and John Travolta are reportedly hiding Scientology secrets. Um, tell us something we don’t know! That entire religion is such a creepy cult, but one that keeps growing and growing, and continuing to get away with atrocities that would land a less powerful organization behind bars – or at least, under some serious scrutiny.

Apparently, the FBI has been conducting a months-long investigation into Scientology, and was forced to turn over many of these documents to the National Enquirer under the ‘Freedom of Information Act’.

Former high-ranking Scientologist Jesse Prince spoke to the Enquirer about the secrets behind Scientology, explaining, “Both Tom and John have defended Scientology and have talked openly about how the church has helped them. But they’ve never publicly discussed the damaging details contained in these FBI files. Based on their status with the church, I wonder if they might know about what’s in the files. How could they not?”

This is a question that has been bandied about quite a lot – how is it possible that such high-ranking celebrity members of Scientology don’t know of the depraved and often inhumane occurrences happening behind-the-scenes? I don’t buy that Tom Cruise and John Travolta are choosing to remain ignorant to everything, but how can they stand by and let the brainwashing and torturing continue? Someone needs to ask them these questions, not dodge around the fact that two famous Hollywood celebrities are part of a creepy, cult-y, reportedly abusive ‘religion.’

The Enquirer’s cover also has several other high-profile stories, including a Sharon Stone drug overdose cover-up. Plus, America’s [former] Sweetheart Reese Witherspoon is reportedly embroiled in yet another public scandal – this time, an animal cruelty scandal. And finally, Michael Phelps’ current girlfriend, Taylor Lianne Chandler, was born a man!