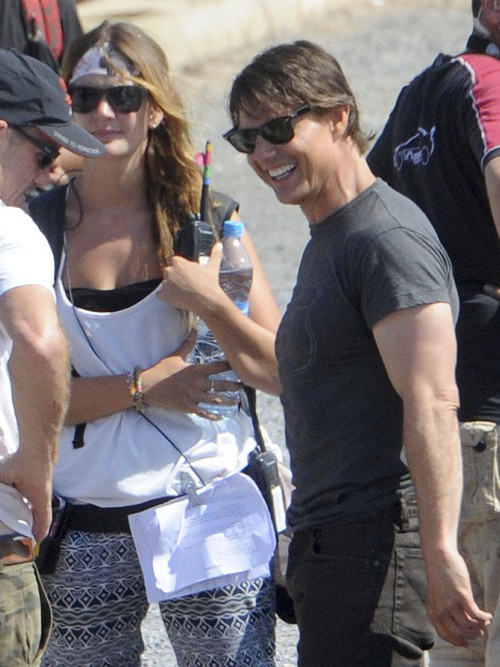 Even though most of Hollywood’s former Bachelors are getting engaged and married, Tom Cruise remains single. It’s not for lack of trying on his part, but after the Katie Holmes debacle, no self-respecting celebrity wants to come within five feet of him. I guess that’s why he’s now [supposedly] resorted to hitting on 22-year-old assistants.

According to US Weekly, Tom is always flirting with his 22-year-old assistant, Emily, on the set of Mission Impossible 5. And by the way, this story is coming from US Weekly, so it’s probably been verified by multiple sources before appearing in the magazine.

US Weekly’s sources also add that Tom asked this Emily to go on a date with him after filming wrapped, explaining, “Most people on the film have noticed how into her he is.” Ok, creepy much? Tom Cruise is 52 years old, and I don’t care if he is one of the biggest movie stars in the world, dating a 22-year-old and even hitting on a 22-year-old falls into the realm of creepy. I mean, I know it’s standard norm for Hollywood, but does Tom Cruise’s reputation really need to suffer more? Granted, the older women are probably savvy to his tricks, so he might just be going for the only age group who still cares that he’s Mr. Tom Cruise. But even then, this poor Emily is probably just flattered by the attention, even though it’s a completely inappropriate workplace relationship.

Plus, you know his assistant is cool with all the crazy Scientology talk, since she agreed to be his assistant. Tom probably thinks that’s his cue to go hit on any female, so long as she’s not scared by his cult-like religious affiliations.  One can only hope that this Emily doesn’t feel pressured into dating Tom, even though Hollywood pressure will probably force her hand on that one.

Tom Cruise is crushing on his ‘Mission: Impossible 5’ on-set assistant Emily. Multiple reports confirm that the charismatic casanova and his 22 year old crew member crush are smitten for each other, though Cruise will wait until production ends to make his move. These images show her right by the actor’s side on two different days of filming. FameFlynet