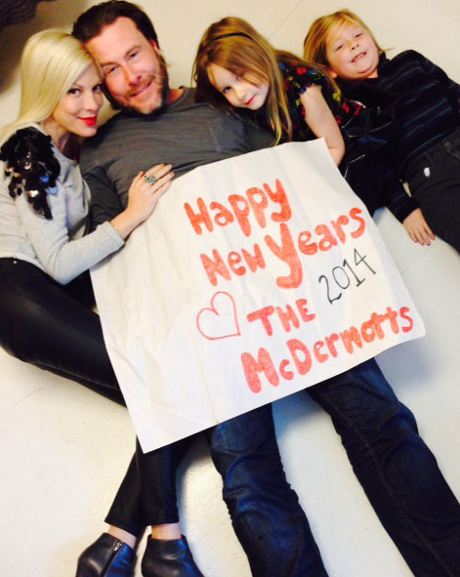 You’d think that after catching wind of Dean McDermott‘s cheating ways that Tori Spelling would kick him to the curb. Well, it seems as if she’s turning a blind eye to the whole situation — at least during the holidays. Recently, news surfaced that Dean had an affair with a woman by the name of Emily Goodhand and, since the info’s release, Tori hasn’t commented on the allegations. Instead, she’s chosen to post happy-happy-sweet holiday photos of her dear family. Though, none of them (up until now) have featured Dean.

“Happy New Year everyone! I can NOT believe it’s 2014. Time flies when you’re having fun… and when you have 4 little ones running around! We rang in the New Year with (kid-friendly) cocktails, lots of yummy treats and some quality family time,” she wrote alongside the pic. The pic (above) features her two oldest children, Dean, AND the wedding ring she was recently seen without.

She’s recently posted videos, photos, and countless messages on her platforms, including her website edTORIal. However, as stated above, nowhere does she mention Dean’s alleged infidelity. Dean and Tori both met while they were previously involved with other people so perhaps the idea of sleeping around every once in a while doesn’t bother Tori. Sort of hard to believe, but . . . who knows? #CelebsBeWeird.

Tori’s silence seems to be sending a very direct message, one that seems to say, I’m not looking to share this aspect of my life with you all. However, with that said, you know they talked about it. You don’t just ignore cheating allegations, whether they come from a tabloid source or your best friend. So either they’ve discussed it with each other and they’ve smoothed things out for the best or they’ll be breaking up very soon.

I think they’ll weather this one out. What are your thoughts on the matter? Will Tori Spelling & Dean McDermott split or is this marriage unbreakable?