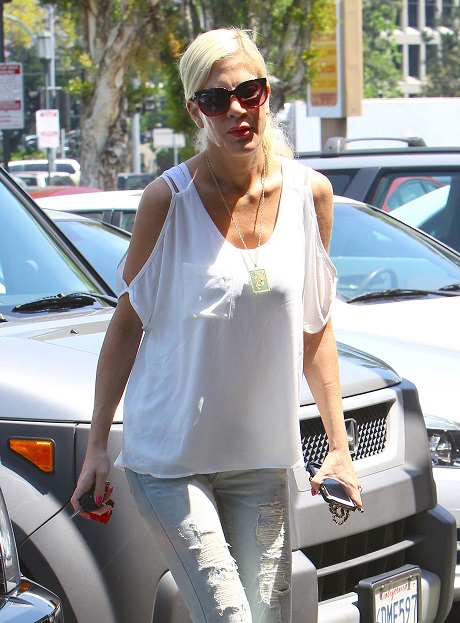 Did you guys tune into True Tori on Lifetime to watch as Tori Spelling‘s marriage to Dean McDermott unraveled on camera? I still firmly believe that this is the best acting gig that they both have had — maybe ever. And, conveniently enough, it looks like True Tori will indeed get a second season, so that means they need a story line. Tori needed to come up with something good and that will also keep her in control of the marriage, right?

Well, according to the June 16th print edition of InTouch magazine, Tori thinks that aiming for baby number 5 is the best plan ever, in spite of being broke and having a messy marriage. Tori apparently thinks that Dean is the perfect husband when she is pregnant. He’s extremely attentive and she believes that it is the one sure time that she can trust him not to stray so it’s the ideal thing to repair their relationship. At least for 9 months and then the couple is left with another mouth to feed and another needy child to contend with.

Sources say that, while True Tori showed her with the kids a lot, those moments might not be true to life. Dean is supposedly the real hands-on parent the majority of the time, which means that another baby would ultimately be just one more stresser for him. Do you think that another baby would keep Dean in line like Tori believes or is a pregnancy just a temporary fix for a deep rooted problem? Leave your thoughts in the comments section below!