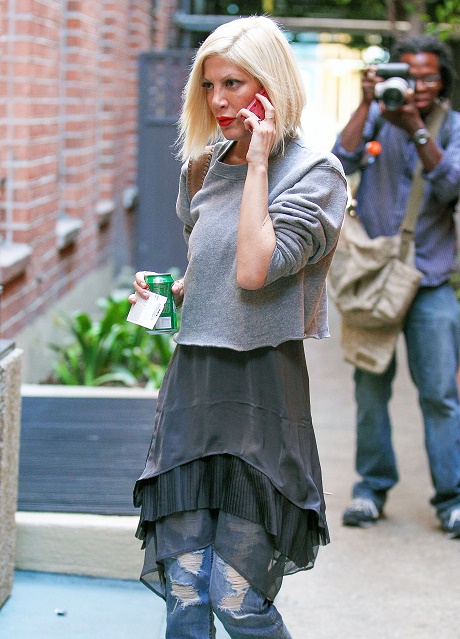 Before Tori Spelling met her current hubby, Dean McDermott, he was married to another woman, Mary Jo Eustace – but that didn’t seem to stop them from shacking up. Tori Spelling is a giant, stinking, hypocritical homewrecker, and the sad part is that she’s not even ashamed of that! A new promo for Lifetime’s True Tori shows Tori Spelling bragging about how she and Dean slept together the first time they met [ironically, on the set of a Lifetime movie]. Except wait, Dean was totally married when he met Tori for the first time.

So there are basically two scenarios – Scenario A has Tori being a homewrecker and Dean being a cheater, and Scenario B has Tori being crazy and lying. Honestly, I wouldn’t be surprised by either scenario, but I think Tori is telling the truth. As we’ve seen, Dean McDermott’s cheating knows no bounds, and if he can cheat on Tori Spelling, what’s to say he couldn’t cheat on his ex-wife as well?

The saddest part is that Dean McDermott and Mary Jo Eustace were in the process of adopting a child as well, but what does Tori care about breaking apart a family? It was apparently looooove at first sight. She describes it as, “It wasn’t like, ‘oh, just get your rocks off, have sex with someone just to have sex,’ you know? It was a conscious decision, like, fell head over heels for you.”

Right. Well, I hope she keeps telling herself that as the ‘Dean McDermott cheating on her‘ headlines continue to make the news. Karma’s a bitch, and Tori’s learning that the hard way. Unfortunately, she seems to be in deep denial about the state of her marriage, but then again, both she and Dean are cheaters  – and  I have no sympathy for either of them.