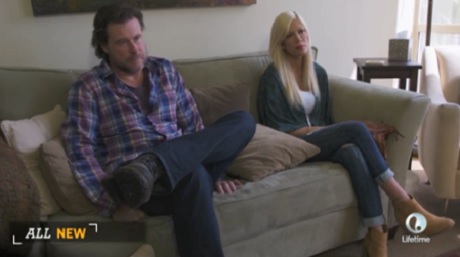 Does anyone still believe there is any reality in Tori Spelling and Dean McDermott’s “reality” TV series, True Tori? The name of the show itself is an oxymoron, which is fitting given the show’s two stars are both complete morons for trying to lead the few fans they have left down this pathetic grab for money.

If you’ve been following CDL’s take on the show, you’d have known long ago that this series was anything BUT reality. Before Tori’s series even began we questioned the affair given Emily Goodhand couldn’t be found anywhere on the Internet, and the only picture that Us Magazine had for their big exclusive looked like a grainy cell phone photo. Well, let me tell you…anyone who sells their story about an affair is getting a full page spread.

They want money and fame for their (ahem) efforts. So, fans are to believe that Emily spoke out, gave her story, and then provided one distorted cell phone pic that a friend must have taken with a phone from about 10 years ago? Come on! To make matters worse, the reunion show that aired the week after the final episode of True Tori was said to “answer all the burning questions” everyone had. They truly disappointed, as they basically rehashed everything they already said in earlier episodes.

Tori supposedly chickened out of asking Dean if there were other women. Anyone want to call this one? It is not only obvious, it is what CDL has said since BEFORE the first episode aired…Tori hatched this plan so that while Dean would initially take the brunt for having the affair, she promised to make him look like the loving husband in the end who just made a huge mistake — but is getting help for himself.

Tori believed that if she looked like the victim, people would feel sorry for her and embrace her. Once Dean showed how much he loved her and fought for his marriage by going to rehab, people would accept him and want to see the two succeed. Great idea for a made-for-tv movie, but not when plotting your life, Tori.

So, with this “burning” question set to be answered on the reunion, she drew in the viewers who wanted to see Dean’s reaction (now she’s got the drama aspect), but then doesn’t ask it after all because she is scared (she covers the victim role here). And because no one will ever know (even though we all DO know), supposedly no one can hate Dean for having more than one affair. Such a perfect ending that it almost seems like someone is writing this stuff! Oh wait…there IS someone writing this stuff. Jezebel notes that “there are the story producers listed in the credits at the end of the show, but who are absent from the show’s IMDB page. Story producers are essentially writers for reality TV.”

Tori and Dean themselves both referred to prior arguments that were filmed as “episodes.” Who refers to their lives as episodes? Well, perhaps someone who is filming their so-called reality as a show for profits. The second “burning question” that was asked during the reunion was why no one could find any information on Emily Goodhand online. Dean quickly jumped in to answer stating that it is very easy to wipe your identity from the Internet. Really, Dean? Perhaps you are trying to add IT Tech to your list of many talents, I suppose, but please don’t quit your day job. Oh wait….

So let’s just say IT Specialist Dean knows that his good friend Goodhand was an Internet mastermind who, while not taking grainy cell phone photos with a 2003 phone, has successfully wiped her identity completely from the entire web. Do we really believe she has not ONE friend, acquaintance, neighbor, ex-boyfriend, fling, former classmate, childhood buddy, cashier at her local grocery store — NOT ONE person to come forward and say anything about her, good or bad? Even for the money the tabloids would have paid?! No way. That is just impossible. Tori, your “life” writers should have done their homework. We cannot possibly buy what you and Dean are selling here.

Dean’s own son called the show a fake. As Star Magazine reported, Dean’s son Jack, 15, from his first wife tweeted, “‘Reality’ show my ass! It’s all set up plz don’t buy into it. My father is not what the show makes him to be, he is a good man.” How sad that Dean would allow himself to be degraded on the show, leaving his 15-year-old to have to defend his integrity. Oh wait…

The charade continues tonight, as the couple drags this cringe-worthy series out for as long as they possibly can as they plan to reflect on past explosive moments in an episode entitled “Confessions.” Please…the only confession folks are looking for at this point is one from Tori and Dean about making up this pathetic affair to gain some money, a new series, and likely another Tori book. Maybe this one can be titled “FabricaTORi.”

Are you with us on this one CDLers? Share your comments with us below!