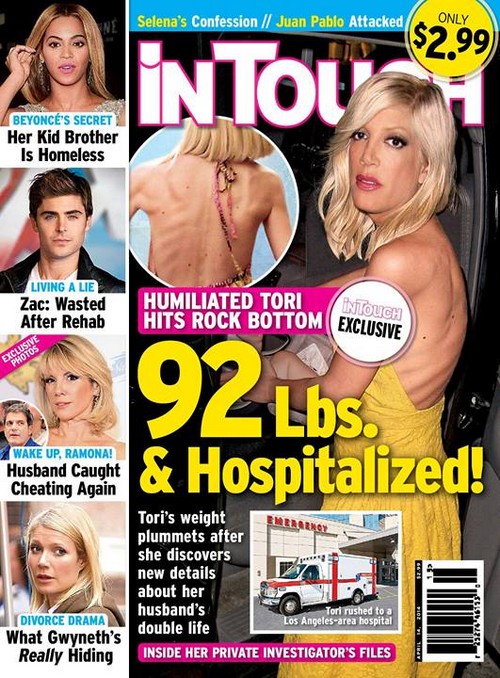 Tori Spelling has been grabbing the kinds of headlines in recent months that all celebs try really hard to avoid. First back in December we learned that her husband, Dean McDermott is a serial cheater and going off to rehab for sex addiction may have taught him a new way of dealing with himself but there’s no guarantee that would ever repair his marriage. Instead we have watched Tori absolutely crumbling emotionally as her weight has continued to plummet. According to the April 14th print edition of In Touch magazine Tori is tipping the scales at a measly 92 pounds and she has been rushed to the hospital on at least one occasion.

Supposedly Tori has discovered new details about Dean’s double life thanks to the private investigator that she hired. Tori realized that she couldn’t count on Dean to tell her the truth about things and so she decided to dig for more info on her own but that decision has caused her a lot of emotional turmoil. Tori has four young children to care for and while she claims to be putting them first, by not taking care of herself she’s actually putting them at risk instead. Of course all of this didn’t stop Tori and Dean from signing up for a reality show based on his cheating and their current life together post sex rehab. Have you ever seen such pathetic disgusting fame-whoring? I never thought I’d see the day when anyone made the Kardashians look good!

Also in the latest issue of In Touch you can learn about Zac Efron’s fake life as well. While he claimed to head off to rehab to clean himself up, friends’ say that he has done no such thing and that his recent fight on Skid Row was about drugs not a failed trip for a late night meal.

I don’t think anyone is too shocked by Gwyneth Paltow and Chris Martin’s divorce announcement but you have to wonder just how much she’s really hiding. In Touch goes behind the scenes to bring us all up to date on what’s really brewing with these two. Do you think that they both have had numerous affairs over the years? Tell us your thoughts in the comments below!