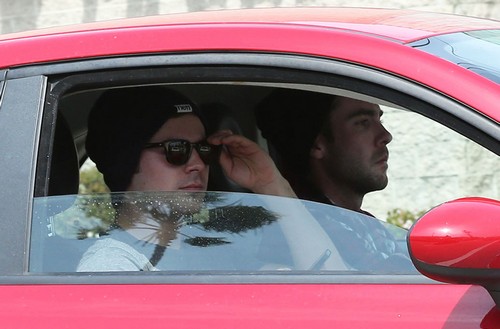 It looks like Zac Efron has taken a huge tumble off the wagon again and even his friends don’t believe for a second that he was on the hunt for sushi before being attacked in downtown L.A. The other night. According to Zac he and his bodyguard were headed out to get food when they just so happened to run out of gas near skid row. The supposed bodyguard claims that he was attacked first and Zac saved him. It’s a nifty story but it doesn’t jive with what police saw when they showed up.

According to TMZ a police source says that Zac was the only one bleeding when they arrived and they thought the whole story was kind of sketchy. As it turns out, Zac’s closest friends aren’t buying it either. They have feared for awhile now that he was using drugs again. Zac supposedly went to rehab twice last year but now a source has said that he actually was holed up at a friends’ house receiving outpatient therapy. Zac is also kind of a loner and isn’t spotted out and about that often so it’s a stretch to think that he would be trolling for Sushi at midnight in a known drug-dealing zone under a freeway. It looks a lot more like this was a drug deal gone bad.

Oh and that bodyguard isn’t really a bodyguard. But he is a convicted drug dealer who Zac has been hanging with lots of the time recently – presumably doing drugs! So that little nugget of info only makes things look shadier for Zac. Do you believe his story or do you think that he is back on the drugs and was looking for a fix? Tell us your thoughts in the comments below!