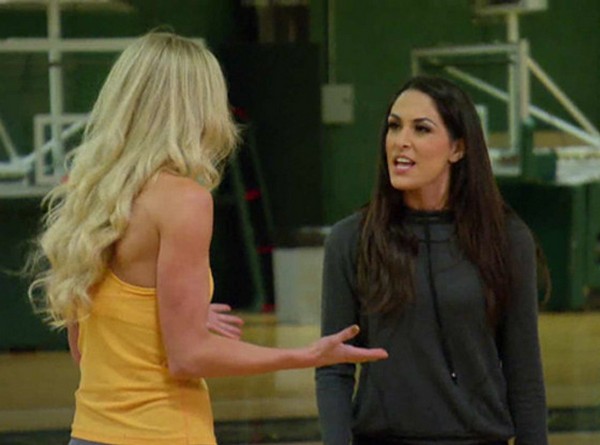 Tonight on E! TOTAL DIVAS continues with a whole new episode called, “On Brie’s Bad Side.”  On tonight’s third episode Summer Rae makes an instant enemy of Brie by flirting with Daniel Bryan, and finds herself engaged in an escalating feud with Nattie.

On last week’s episode with convincing from Brie, Daniel Bryan decided to get a tour bus; Eva Marie’s past came back to embarrass her; and Nikki lost a tooth in a match.  Did you watch last week’s episode?  We did and we recapped it right here for your enjoyment.

On tonight’s episode when Summer Rae flirts with Daniel Bryan, she makes an instant enemy of Brie; Nattie’s feud with Summer Rae escalates.Revealing the real women behind the WWE Divas for the first time.  When one ‘diva’ is pushed too far, she pushes back.

Tonight’s Season two Episode 3 of Total Diva’s is sure to be great, especially since we were left hanging by just about every cast member! Tune in at 9PM EST to E! and we will also be recapping the episode right here for you! In the meantime, should Nikki stay with John and give up her dream of having a family in favor of his admitted selfish lifestyle? Tell us your thoughts in the comments below!

Tonight’s episode begins with Eva Marie sharing her delight that her riding buddy is Summer Rae. After what she has been through, she feels like Summer Rae is on her side. Both ladies feel at a disadvantage with the others now and are happy to be off the bus. They talk about how Nattie has been acting, with Summer Rae sharing that she does not have a problem with Nattie and she cannot understand why she does not like her.

Brie shares with Nikki that she feels bad about having Brian get the bus because he surely isn’t enjoying it. The girls are being loud and wild. Later, Eva Marie is excited is being a part of Raw and plans to have a great time.

Back on the bus, Ariane shares a bit of her rap and Brian and the guests on the bus are teasing her for sending the wrong message to young girls. They have two new guests on the bus, the Usos, and everyone seems to be relaxing and having a good time when they hear some noise coming from the bathroom. Nattie had used icy hot on her back and inner thighs and somehow, while going to the bathroom, she ended up getting the icy hot in her two nether regions.

Nattie is meeting a young girl, Alexis, through the Make-A-Wish Foundation. Nattie wants to make it really special. Nattie gives her a special memento to take home. Meanwhile, Summer Rae goes to see Sandra about making her costume a little skimpier. Later, Brie walks on the bus and catches Trinity and Jonathan “having sex on the bus.”

Later, on the bus, everyone is sitting around and talking. Brie brings up what she saw earlier and everyone starts teasing them. Brian makes it clear…no more sharing a bus. Brie is very happy it is the last night on the bus.

Brie and Brian are eating and Nikki comes up. Brie shares that the girls have a photo shoot with Summer Rae. Then, Brian brings up that Summer Rae gave him a bad vibe when she came up and talked to him alone and was a little too flirty. Nikki shares Summer Rae does that with all the girls’ boyfriends. Brie goes immediately to Summer Rae and confronts her. Summer counters that Brie is insecure in her relationship and that is why she has a problem with it. Summer Rae tells Eva Marie about it and she listens like a friend but inside believes she crossed the line. Later, Brian calms Brie’s fears.

Nikki, Brie, and Nattie are watching the match with Brian on the monitor when Summer Rae comes up and extends the olive branch to Brie wanting to make peace. She asks her to talk to her but Brue makes it clear that they are co-workers and not friends. She said she does not want to talk to her. Summer Rae says that she is trying to be professional and wants to clear things up but Brie dismisses her. Shortly after, Brie sees that Brian seems hurt after hitting his head on the mat. After a doctor visit, Brian is told to go home, to bed, to get some rest.

Later, Eva Marie is excited to get her own action figure. Nattie is happy with her action figure when Summer Rae walks in and starts commenting on how great the photoshop is on the picture because she looks so much better in the picture than in real life. She also says she looks much younger in the pictures so they must be from a few years ago. Nattie pulls her aside and blasts her when Summer Rae tries to play dumb like she had no idea why Nattie was upset. She calls her on it and walks off, leaving Summer Rae standing with her mouth open.

While Brian had to go home, Brie had to stay and work. Nikki decides to put the girls together at a sit-down to let all their feelings out and clear the air. Summer Rae apologizes to Brie and gives an explanation for her mistake. Next is Ariane apologizing to Eva Marie and offering her apology again and admits to making a mistake. Nattie tells Summer Rae that she doesn’t like many things about her. Summer Rae asks what specifically. When Nattie cannot answer, she calls her on not having any reason not to like her. They end it there with a reminder to be professional.

A few minutes later, Nattie talks to Fandango and shares her feelings about Summer Rae’s flirty ways. Summer Rae walks up and Nattie takes off, but Fandango tells her what she said. She is HEATED and tells him she is going to talk to Nattie, but she won’t be doing that at work and decides to show up at her home unannounced. Summer Rae tells her she’d be better off spending her time working on her craft instead of gossiping. Again she blames someone for being insecure as the reason for not being nice to her. Summer Rae tells Nattie that she is threatened by her. Nattie tells her she is borderline stripper and goes in for a few more digs before Summer Rae slaps her HARD on the face. Nattie literally pushes her off her doorstep and tells her if she comes back, she will call the police. It is getting WILD!

Next week is sure to be another wilde week with our Divas. Meet us back here next week!