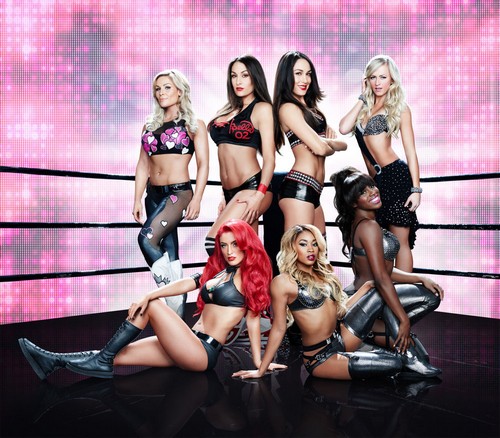 Tonight on E! TOTAL DIVAS continues with a whole new episode called, “Red and Gold.” On this evening’s episode, Eva Marie and Summer Rae clash over being paired together in the ring; Ariane’s quest for fame goes too far; and Nattie’s artistic side comes out.
On last week’s episode it looked like Summer Rae and Fandango’s relationship was getting a bit more intense, while Brie had a hard time with becoming a bride; Trinity did the unspeakable and betrayed Jon’s trust.  Did you watch last week’s episode?  If you missed it we have a full and detailed recap, right here for you.

On tonight’s episode Eva Marie and Summer Rae aren’t too pleased with being put together in the ring, causing them to fight and bicker, Ariane goes too far in wanting to become famous and Nattie discovers that she’s got an artistic side and wants to embrace it.

Tonight’s Season 2 Episode 8 of Total Diva’s is sure to be great, especially since we were left hanging by just about every cast member! Tune in at 9PM EST to E! We will also be recapping the episode right here for you! In the meantime, should Nikki stay with John and give up her dream of having a family in favor of his admitted selfish lifestyle? Tell us your thoughts in the comments below!

Tonight’s episode begins with Nikki calling Brie, multitasking as she makes coffee and answers the door. There was a delivery man at the door and he was armed with a huge box. Nikki opens the housewarming gift from Nattie which is an abstract painting of her and Jon (supposedly) but Nikki thinks she looks like she is in diapers. It was a thoughtful gift, but not one of her faves. She is forced to hang it as Nattie is visiting soon, but plans to remove it moments she is out the door. When she arrives, she and Brie lay it on thick about how much they love the gift. Nattie has no clue that Nikki hates it.

Meanwhile, Ariane is talking about her single’s release and how she plans to market herself and get some good publicity. She is plotting ways to get publicity by going to places that are full of paparazzi. Her and her man go to Robertson Blvd. in LA hoping to get some attention from the photogs. Mission accomplished. After one photog snaps her photo, the rest rush in to get some shots.

Later, Eva Marie and Summer Rae begin training together. They need to be prepared because they don’t know how soon they will begin. Summer Rae is really upset with Eva Marie and she lets her know. Since the first time they practiced, Eva Marie hadn’t practices and Summer Rae gets on her for it because she didn’t retain anything. She keeps stressing that this is live tv and they have to have their moves down. Later, Eva Marie needs Sandra to help her fix her outfit which it too small on the bottom.

Meanwhile, in LA, Ariane is having lunch and wonders why the pics that were taken were not yet online.  Hang tight, Ariane…it’s only been like 10 minutes! Later, Ariane has a great idea and enlists Ray J to help her “train” at the gym, knowing the paparazzi will be all over that. It works as they are photographed the entire walk into the gym. Then Ariane and Ray J get some MMA training and she knows this will make it to the media.

Nattie is at it again. She is painting a picture for Bryan and Brie for their wedding and it is worse than the first one for Nikki and Jon. They arrive at the airport and the car Nattie reserved is not available so she is stuck with a compact and cannot fit the picture she made for Brie and Bryan in the car, so she ties it on top using leggings and pantyhose! As she and  TJ head to the arena which is about 5 miles away, they lose the picture off the roof of the car onto the road. They go back for the box on the side of the road and head on to the arena. They arrive at the arena and Brie and Bryan are right there.  Brie has to pretend she likes the painting as well. Bryan thinks it was very thoughtful but later jokes that his nose looks like testicles.

Later, it is the test run for Eva Marie and Summer Rae and Summer Rae shares her fears with Mark. Before she even found out whether or not Eva Marie was able to pull off what they practiced, she went and told Mark how worried she is because Eva Marie didn’t seem to retain anything. When Mark asks her for suggestions, she says she doesn’t know but she doesn’t want to look bad because of her partner. Mark says he is going to think about how to handle, but tells her to head out.

The match begins and all of a sudden, Eva Marie finds out that Mark has changed things around and has added Nattie and Tamina into the tag team bout so it is now three on three. This isn’t too bad, Eva Marie thinks, until she realizes that Summer Rae had a plan because she didn’t tag her in one despite the many times she reached to Summer Rae. Eva Marie confronts her after and is pissed. Summer Rae tries to play dumb. Brie confronts Summer Rae, but she just tells Brie that Eva Marie sucked and couldn’t do the moves. Ariane asks Eva Marie what happened and even Tamina wondered why things went the way they did. No one seems to have any clue…except Summer Rae who plotted the entire thing. Everyone is upset and the Red and Gold match because they see what Summer Rae did to Eva Marie.

Later, Eva Marie confronts Summer Rae again and tells her what she found out that Summer Rae has been saying about her. Summer Rae makes fun of Eva Marie for walking away. Eva Marie comes back and tells Summer Rae that she is just jealous that she’ll outshine her, to which Summer Rae responds, “I can dye my hair red and look better than you.” They trade a few more nasty comments and Eva Marie storms out.

Later, Ariane is at a photo shoot having a blast. That is, until Vinnie came to her and asked why there are pics of her and Ray J all over the internet saying they are a couple. She never told him about her workout plot.  Later at her launch party, she apologizes in front of everyone claiming that she was wrong for doing that without telling him. They all have a blast honoring Ariane at her party.

Trinity is looking good in the ring and she knows it. All is well until she ends up really hurt after being kneed in the eye. Poor Trinity…that had to hurt!

Next week we’ll get a good look at her black eye!