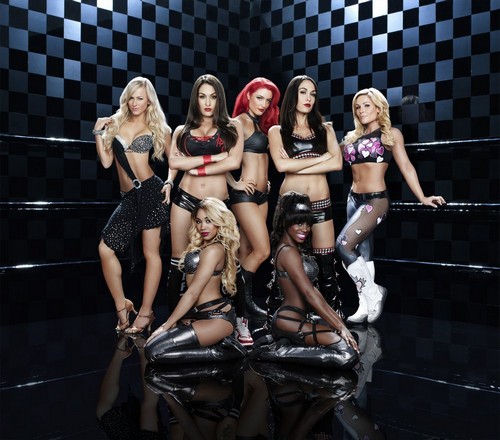 Tonight on E! TOTAL DIVAS continues with a whole new episode called, “Flirting With Fandango.” On this evening’s episode, Summer Rae’s relationship with Fandango moves to the next level; Brie can’t enjoy being a bride; Trinity goes behind Jon’s back and betrays him.

On last week’s episode Ariane threw a party and lost a cat while house-sitting for Nattie, who was spending her vacation in New York City fighting with TJ about money. Meanwhile, Brie educated Nikki about the foods she eats.  Did you watch last week’s episode?  If you missed it we have a full and detailed recap, right here for you.

On tonight’s episode it looks like Summer Rae and Fandango’s relationship is getting a bit more intense, while Brie is has a hard time with becoming a bride; Trinity does the unspeakable and betrays Jon’s trust.

Tonight’s Season 2 Episode 7 of Total Diva’s is sure to be great, especially since we were left hanging by just about every cast member! Tune in at 9PM EST to E! We will also be recapping the episode right here for you! In the meantime, should Nikki stay with John and give up her dream of having a family in favor of his admitted selfish lifestyle? Tell us your thoughts in the comments below!

Tonight’s episode begins with Brie sifting through a magazine as Bryan walks in. She is looking through bridal magazines. The wedding is only a couple months away and Brie is starting to get excited. They start practicing their special wedding day kiss.

Summer Rae comes to Eva Marie’s hotel room and shares how she just found out that another ex has gotten engaged and she is feeling down because of the constant reminder that she is single. Eva Marie wants to help her friend meet someone.

Trinity tells Jon that he keeps forgetting to tell her to take her birth control pills. He wonders why she is depending on him to remind her. She says she wants time alone before kids, and that they are at the height of their careers so she would rather put those plans on hold for now.

Later, Nattie, Eva Marie, Summer Rae, Brie and Ariane are out to eat and Summer Rae shares the new information she got about her ex. The girls start suggesting she start something up with her hot partner Fandango. She doesn’t seem too receptive. Then later when she sees him in the ring, she starts to think about what the girls were saying about him and talks about starts to think about how cute he is. She starts flirting with him after, just as the girls recommended. She finds out he lives near her and suggests they meet up for dinner sometime. He either is not into her or is not picking up her vibes because he doesn’t seem too receptive.

Brie is trying on wedding gowns. As her mom is there, she is bummed that her twin is not there yet. Almost immediately, she finds the dress she knows is the one. Nikki finally shows up. While she claims she is okay with the whole scene to her mom, she has a look of jealousy in her eyes.

Trinity, Ariane, and Eva Marie are in the car and the girls are teasing Trinity about getting pregnant. They start discussing birth control options and Eva Marie shares that currently she is using nothing. Trinity shares what she’s learned about implanted birth control. She shares that Jon is not against the idea of having kids now, but Trinity wants to wait. Later, she shares how pleased she is with the direction of her career and how she can’t risk that right now.

Meanwhile, the twins go shopping for her dress as maid of honor. Brie is not liking what Nikki is picking. Nikki wants to show major cleavage, but Brie doesn’t want that look and tells Nikki as much. Nikki thinks Brie is trying purposefully to make her look frumpy so she can shine. Brie like the last dress she tries, but Nikki hates it. Brie reminds her, “my day.” To which Nikki responds, “your day,” very sarcastically.

Trinity and her mom head to the OB/GYN but Jon has no idea she is looking into other birth control methods. She pretty much decided she wants the implant, and is ready to get it, but she starts feeling bad that she hasn’t been totally upfront with Jon. He texts her while she is there, but she doesn’t respond because she doesn’t want him to know where she is.

The date with Summer Rae and Fandango finally happens. They have a driver and they head to a bar named Salty’s. Summer Rae is flirting big time on the way, but it doesn’t seem like her charms are working any kind of magic. The drinks are pouring and Summer Rae is trying to figure out whether or not Fandango has any interest in her. Later on the ride home, Fandango shares that he was impressed with Summer Rae taking shots. They talk about their night and head back to his place. He invites her to spend the night and the two have a little party with a lot of alcohol. Everything was great and Summer Rae was so happy with the direction things were going, but after she finally gets the kiss she wanted, she realizes that they have no chemistry. She stops and tells him that she is happy with what they’ve had as friends and doesn’t want to mess that up and tells him goodnight. Later at practice, she decides not to tell the ladies about her night with Fandango. Trinity, however, shares her news…she got the implant and Jon still doesn’t know. Jon shows up and Trinity believes that is the right time to tell him. She tries explaining her reasoning but Jon thinks it is shady that she did this behind his back. He is really upset that she didn’t even discuss it with him.

The twins are at the gym working out and while Nikki is trying to work out and get away from Brie’s wedding talk, Brie tells her that she needs her to look at a few dresses that she is thinking about for the bridesmaids, but Nikki is really kind of over it. Nikki snaps and tells Brie that the gym is no place for wedding talk. Brie talks to Bryan later about the whole issue with Nikki. She is angry at how Nikki seems to be destroying this special time for her.

Later, Brie comes over to Nikki’s to work on the invitations as sort of a project for the sisters. Nikki has a bad attitude from the beginning and questions why Brie didn’t just pay someone to do the work. Brie explained she thought they could do it together. Nikki keeps rolling her eyes and drinking her wine and is obviously realllly jealous as it can be seen in her cold attitude. Brie is really upset and starts packing up after telling her that she wanted to do this project together because a wedding only happens once and she thought it would be a special thing for them. Nikki counters with how Brie is not being respectful of her time and the fact that she is so tired she cannot even think of helping. Brie storms out and hints she may not want Nikki to be her maid of honor any longer. Later, Brie and her mom are talking in the car and Brie shares what has been going on with Nikki. Her mom sheds some light on why Nikki may be acting this way. Brie realizes that maybe iin her effort to include Nikki, Nikki may think she is rubbing it in her face because it is something she wants for herself so much.

Fandango approaches Summer Rae at work and they talk about what happened and Summer Rae again expresses how she’d rather remain friends and not ruin what they have, They talk about a “maybe one day” factor, but likely..this relationship is a dud off the canvas.

Jon shares his feeling with Trinity about how upset she is for not sharing her plans with him before doing something he believes is very drastic. Again, she tries to explain her reasoning and defend her right to govern her own body. He is unfazed by her efforts to make peace. He shares that it wasn’t as much about the birth control as it is that she didn’t tell him and did it behind her back. They should have done this as a couple. Trinity gets it and apologizes and assures Jon from now on they will makes decisions as a team. They hug and make up.

Later, Brie finds Nikki and asks to have a private conversation with her. She is trying to be nice and Nikki is still rolling her eyes and playing with her hair. They each share their side and what they are feeling, and end up hugging and smiling at the end after they come to terms with how they need to be considerate of one another. Somehow, I’m not too sure Nikki will be able to get over her jealousy as they get closer to Brie’s big day.

Meet us here next week for all the details of the next episode!