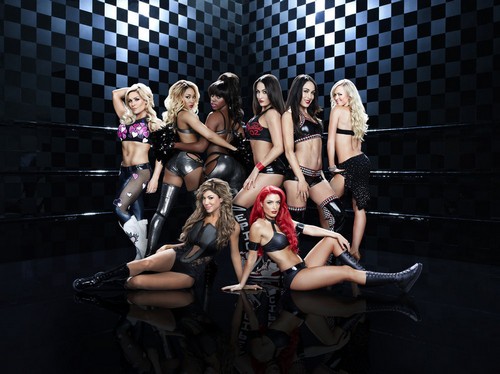 Tonight on E! the WWE’s Total Diva starring the Bella Twins and the rest of the Divas returns with an all new Sunday September 14, Season 3 episode 2 called, “Mo’ Marriage, Mo’ Problems.”  Are you buying the latest Bella Twins “hate each other” storyline for WWE.  The promos that these girls have been asked to cut of late are downright painful.

On last week’s episode season 3 kicked off with Nikki planning her future without her current boyfriend John Cena; at the same time, life turned topsy-turvy for Eva when she was forced to choose between family and her husband; and tensions were high when a former diva returned to the roster, revealing a dark secret.  If you missed last week’s episode and want to catch up before tonight’s episode with a full and detailed recap, we have one for you!

On tonight’s episode Brie regrets quarreling with her husband when he delivers devastating news; Nikki’s secret has John fearing the end of their relationship, and Trinity is blindsided when Ariane puts the future of the Funkadactyls at risk.

Tonight’s episode of Total Divas begins with John demanding to know what the medication is that he found in Nikki’s room. He thinks she brought drugs in to the house, but she explains that they are just hormone shots, because she is freezing her eggs. John doesn’t say much, he tells her to put them away, and Nikki knows that he is not happy.

At Brie’s house she and Bryan are packing because they just bought a new house. They are having the baby talk too, brie reminds Bryan that she wants “two babies out of her vagina” by the time she turns 35 years old. Bryan is trying to get her to wait, because he is going to be on the road a lot for the next few years.

Nikki goes out to eat with Eva and Nattie and fills them in on John finding her syringes. Eva says she is in the dog house with her hubby too because she has been pressuring Jonathan to convert to Catholicism so they can have a ceremony in the Catholic church, but `Jonathan isn’t having it.

Mark Carrano calls Ariane and Naomi in to his office and tells them that the Funkadactyls are no more and from now on Naomi will be fighting in single matches. Ariane has been demoted, and it will be her job to valet Naomi from now on. Ariane is devastated, she tells Eva and Nattie that Mark demoted her. He says that he needs more experience, but how is she going to get more experience if she is basically Naomi’s water girl.

Bryan and Brie head to their new house to pick up the house keys form the real estate agent. Brie is ecstatic because this is the first home that she has ever bought. They walk through the house with the contractor and Brie begins listing off all of the things they need to change. Bryan is pushing to get solar panels and make the house more green, and he reminds her that they are on a budget and she can’t redo the entire house. Brie is furious and says she never gets her way, Bryan reminds her that she gets her way all the time, their entire wedding was done “her way.”

Nikki heads out to lunch with John, he brings up her freezing her eggs, and asks her if she would have told him that she did it if he hadn’t caught her. He confesses that Nikki freezing her eggs made her realize that they won’t be together forever, and Nikki is planning for a future without him. She tells him that if he wants her to stop the egg-freezing process, then she will.

Nikki and Brie head out to lunch the next day, and Nikki reveals to Brie that she isn’t going to freeze her eggs after her talk with John. Brie is not happy, she thinks John is selfish and he talked her out of it because he always gets his way. Brie thinks John is a “grown ass man” and he will get over it. Nicole throws in her sister’s face that she doesn’t compromise with her husband Bryan. Nicole explains that she doesn’t want to hurt John’s feelings, Brie snaps that she is going to wake up one day and realize what a huge mistake she make.

Naomi heads out to for a drink with her boyfriend, and he is pushing her to take on a single’s career. Naomi is having second thoughts because she has been working on a team with Ariane for two years. She feels guilty about leaving her behind.

Brie heads home and Bryan reveals that he just got back from the doctor, and found out that he has to have emergency neck surgery next week. Brie is in shock, she didn’t see it coming, he is going to be out of the WWE tour for the foreseeable future. There is a good chance they might take his titles from him.

Nikki and Brie head to a family get together, and Nikki sits down and plays with her nieces and nephews. She begins to think that maybe she made the wrong decision about not freezing her eggs, because she doesn’t want to be “World’s Greatest Aunt” forever, she wants to have her own children.

At Friday Night Raw, Bryan heads in to the ring and announces that he will not be wrestling anymore because he has to have neck surgery. The next day Bryan heads to New York for his surgery, and Brie is devastated that she has to go to Philadelphia for an appearance and can’t get out of it. She calls Bryan form her hotel in Philadelphia to check in on him before he goes in to surgery.

While they are at the gym training, Nikki and John take a break, Nikki decides to break the news to him that she is going to freeze her eggs, even though he doesn’t like it. She has decided that it is something she needs to do to protect herself. John doesn’t say much.

Bryan’s surgery was a success, a few weeks later he and Brie head in to the WWE doctor’s office to see what kind of time he is looking at before he is cleared to return to wrestling. The doctor reveals that he has bad news, and there was more nerve damage than they expected, so he is going to be out of work much longer than they originally expected.

Ariane pays Mark Carrano a visit, she tells him that she is tired of being Naomi’s shadow. Since she hardly got any training, she wants to go back down to NXT to get more training so that she can be a solo wrestler too. Mark tells her that if she goes back down to NXT, there is a chance she won’t be brought back up, and she won’t be a WWE diva anymore. She explains to Mark that she is willing to take that chance, because she wants to be taken serious, and not a cheerleader with pompoms. Afterwards Ariane breaks the news to Naomi, and Naomi is furious that she is splitting them up. Naomi thinks that Ariane is being selfish and isn’t supporting her. Naomi storms off as Ariane yells after her that she is the selfish one.

John is apparently okay with Nikki harvesting her eggs, she sits down with him and he helps her picks out dates that she should have the procedure done. John says that he is going to take care of her during her surgery, and promises to be her maid and her chauffeur.