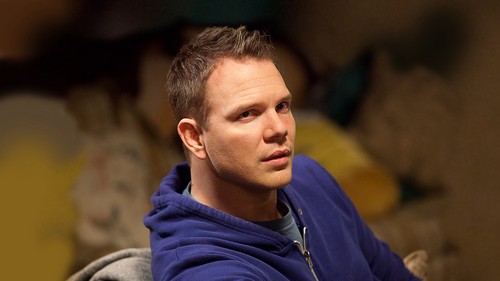 True Blood stayed true to its vampire roots. The über-successful series reinvented the generic vampire/werewolf/lonely-waitress format and introduced us to an unorthodox fantasy setting with a southern twist. But all good things have to come to an end. True Blood received an emergency blood transfusion during the 6th season, but someone mixed up the charts (nurses + amnesia = death) and dropped a drop of garlic butter (doctors + garlic = bad breath) in the IV (vampires + garlic = oh no…).

And now it gets weird.

“When you make me spell it out like this, it sounds strange, but I just want to be clear — that night, I was being literal. There was something about that night where I had that impulse. I guess the best way to put it is sometimes I just like the way [blood] tastes.  I’m absolutely particular. It’s not like it’s just anybody’s! That particular night, it was my girl.”

Oh. My. Gawd. He already looks like Mickey Rourke and Kate Bush’s 80’s love child, so why did he have to bring up the whole blood thing? It gets worse:

“But if you drink it, it does something to you emotionally. It’s hard to describe. It’s kind of like you’re in the moment, and the impulse comes, and … I like it.”

True Blood ends on Sunday. We’re going to walk on sunshine and dance in garlic gardens.

What do you think? Are you a fan of the show? Will you be watching the finale? We will cover it live in great detail here at CDL. Let us know your thoughts in the comments below.