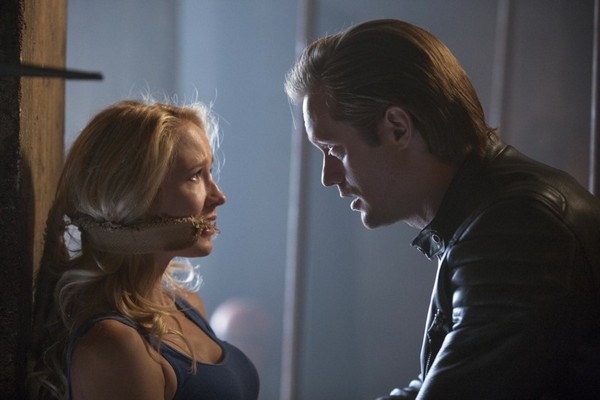 Tonight, TRUE BLOOD returns for its finale and ultimate episode of season 7 called “Thank You.” On tonight’s episode, in the series finale, Sookie imagines her future with—and without—Bill. Meanwhile, Eric and Pam have a difficult time cooperating with Mr. Gus; and Andy is surprised by an unexpected inheritance.

On the last episode, Sookie (Anna Paquin) retreated in confusion. Sam (Sam Trammell) made a choice. Jason (Ryan Kwanten) exercised uncharacteristic restraint, while Eric (Alexander Skarsgard) faced a dilemma after being caught in a lie. Did you watch the last episode? If you missed it, then we have a full and detailed recap, right here for your enjoyment.

Tonight’s new episode is going to be a bloody exciting one and you’re not going to want to miss it. So be sure to tune in for our live coverage of HBO’s True Blood’s finale episode of season 7 called “Love Is to Die” tonight at 9PM EST! Remember to also bookmark Celeb Dirty Laundry and check back here for our live True Blood recaps, reviews, news, and spoilers! In the meantime, check out a sneak peek of tonight’s episode below.

Bill arrives at Sookie’s house. Bill tells Sookie that she deserves everything, that she deserves the world, and that she doesn’t deserve a dark future with him in it. He begins his pity monologue and goes on and on about how his life — existing as an immortal — is a lie. He thinks that if he stays with Sookie that he will be denying her certain aspects of life, such as growing old beside someone and having children. She wonders why he doesn’t just “swear her off,” but he says that he can’t because he loves her too much.

Next, Bill asks Sookie to use her fairy light to destroy him. Of course, she won’t do this, and she asks him to leave.

Meanwhile, Eric and Pam are in the Fangtasia dungeon. Eric hatches a plan: He releases Sarah; he tells her to runaway. Eric says that he plans to kill Mr. Gus and steal New Blood from him. Once they free Sarah, Mr. Gus and a team of men come down to the dungeon. Eric reveals that there’s a tunnel and that they let her escape. Next, they kill Mr. Gus.

Sarah Newlin is at the amusement park and is eating garbage. There, Pam arrives. Sarah also asks to be turned into a vampire; of course, Pam denies her this ‘luxury.’

Jessica shows up at Bill’s mansion and tells him that, while she doesn’t want him to die, she will be fine. Hoyt is there alongside her and Bill asks Hoyt if, one day, he plans on asking Jessica to marry him. She’s furious that he overstepped this boundary.

She immediately calls him into a bedroom and asks for him to explain what just happened. He explains that he doesn’t have much longer left and that he just wishes to know that his “daughter” will be “spoken for.” She understands this sentiment and has an idea: Maybe she and Hoyt could get married right away so that Bill has enough time to see it.

Sookie sits in the kitchen and revisits a memory of her Gran.

Sookie shows up at Jason’s house and tells Jason about what Bill’s asking her to do. She runs into Bridgette while there. Jason’s cell phone rings and it’s Hoyt. Meanwhile, Sookie’s cellphone rings. Hoyt asks Jason to be his Best Man. Jessica asks Sookie to help her out as well.

Sheriff Andy shows up to perform the ceremony. Holly and Arlene show up as well. Bill summons Andy and asks him a favor. Since they are related, he informs Andy that he’ll be inheriting his home. Bill wants him to rent the mansion to Jessica and Hoyt for the sum of 1 dollar a month — and, if they forget to pay for some reason, to look the other way.

Meanwhile, Hoyt gets some cold feet prior to his spontaneous wedding ceremony. Jason tells him that he’s making the right choice and to walk out there and marry the woman of his dreams.

Bill walks Jessica down the “aisle,” and he tells her that she looks so incredibly beautiful. Andy proceeds with the ceremony. They get married.

As Sookie sits beside Bill, she hears his thoughts, something she’s never been able to do before.

Jason gives Sookie a ride back from Bill’s and she tells Jason that she heard Bill’s thoughts. She says that he’s becoming more human in his death.

Sookie calls up Bill and says that she’s made arrangements at the ceremony. It seems as if she’s going to go through with Bill’s request and use the last bit of her fairy light to give him the True Death and, in return, relinquish her fairy powers.

He crawls down into the grave site and removes the coffin lid. He discovers a photograph of him and his little girl. Next, he crawls into the coffin, looks up at Sookie, and says, “I’m ready.” She says, “Bill, I’ll never forget you.”

She gets out her fairy light and stares at it for a long second. She ultimately decides that she doesn’t want to give up her fae life. Bill says that he still wants to die so, instead of blasting him with fairy juju, Sookie breaks a shovel in half, makes a stake, crawls into the grave, and kills him.

Together, they drive the stake through his heart.

Sookie closes the coffin, filled with vampire guts, and sits there distraught.

She crawls back onto the surface and leaves the cemetery.

ONE YEAR LATER: Eric appears on the screen. Pam and him are doing an infomercial selling New Blood.

THREE YEARS AFTER THAT: Eric and Pam have brought New Blood into the  market place as a publicly traded company.

Sookie has a boyfriend and is pregnant. Bridgette and Jason are married with children.

Next, we see a vampire feeding off Sarah in the dungeon of Fangtasia.

Finally, all of our favorite Bon Temps residents gather at Sookie’s place for a warm Thanksgiving dinner.