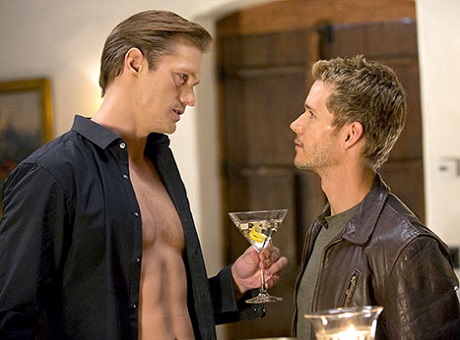 If you’re at all a True Blood fan, then there’s probably no way you’ve avoided talking about the surprising-yet-not-surprising opening scene in Sunday night’s episode, which was titled “I Found You.” If you’re at all opposed to spoilers, then you should turn away now, as certain key events that occurred in this most recent episode are discussed in the following lines! We’d hate for you to despise us forever. While it’s totally our job to spoil you, well, we don’t like to do it unintentionally and against your will.

Eric Northman has currently been missing and, while we do get a very interesting interaction with Eric Northman and Pam at the end of that episode, it’s an intimate moment shared between Jason Stackhouse (Ryan Kwanten) and Eric Northman (Alexander Skarsgard) that has fans’ hearts all aflutter.

The show began with someone stalking Eric Northman through a mansion of some sort. We soon realized the person creeping on the Viking vampire was none other than Jason Stackhouse, Sookie’s older and dumber brother. Looking out a window, realizing he had company, Eric said, “You found me.” Jason responded: “Well, you didn’t make it easy.”

Things progressed from there and, if fans didn’t know it was a dream before, they quickly gained suspicions. Jason jumped on Eric’s back and they ended up on the bed. Eric and Jason shared some passionate kisses, rolled around a bit, and underwent some interesting power shifts. Just before things went much farther, sure enough, Jason woke up in the church — where everyone was gathered after the H-Vamp invasion.

The whole reason Jason had this dream of Eric was because Eric fed Jason some of his blood last season in order to heal him. For those who are familiar with the show’s mythology, then you understand the powerful — and inherently sexual — bond the human and vampire form once a human feeds from a vamp.

Check out the scene below and don’t forget to come back to CDL for all of your True Blood spoilers, previews, and recaps!