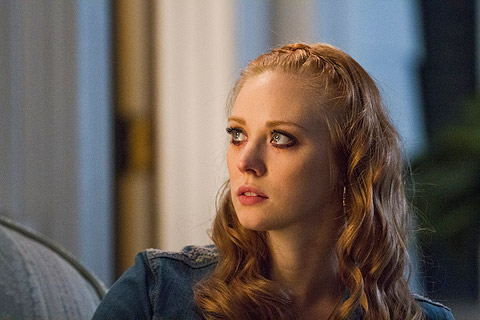 True Blood was back tonight and it was intense, this week rather than mourn Tara and Alcide’s death the Bon Temps townsfolk decided to celebrate their life with a party.  If you are like me and you are anxiously awaiting each episode, we have managed to get our hands on a sneak peek video and some spoilers to whet your appetite for next week’s episode 6 called “Karma.”  So sink your fangs in and enjoy!

On tonight’s episode, exhausted from her recent travails, Sookie found herself the unwilling host of a festive mainstreaming party in Bon Temps. The party was to celebrate the life to Tara and Alcide.  In search of Sarah Newlin, Eric and Pam headed to Dallas and attend a gala fundraiser.  Andy (Chris Bauer) made a life-changing decision to ask Holly to marry him. Jessica and James reached a crossroads and James had a fling with Lafayette. Bill lost himself in remembrance of human days.  And lot’s more happened — did you watch the episode?  If you missed it we have a full and detailed recap, right here for you.

Spoiler alert: If you’re one of those people who doesn’t like spoilers, stop reading now! We have some juicy spoilers for you about the season 7 episode 6 of HBO’s “True Blood.”

On next week’s episode Bill is infected with Hep-V but his infection is different than the other vampires.  Now that Jason and Jessica have hooked up Jason wants to break up with Violet but that is not going to be easy.  Sookie is surprised that she can still sense Bill, he seems to still be in her blood.  Eric and Pam are in trouble they are both silvered and about to face the sunrise together.  How are they going to get out of that?

True Blood episode 6, “Karma” airs on HBO on July 27th, 2014.   Check out the preview video below of episode 6 below and let us know in the comments below what you think!  Are you enjoying season 7 of True Blood?  I am loving it and next week’s episode is going to be so intense! Make sure to check out the preview clip below!