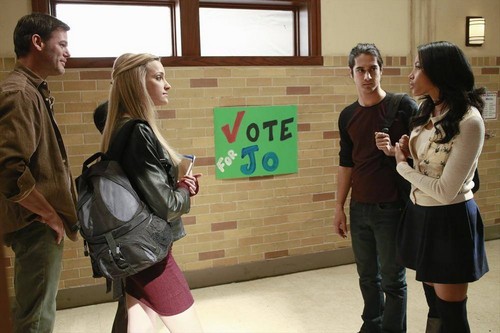 Tonight on ABC Family TWISTED returns after its winter hiatus with a new episode called, “The Son Also Falls.”  On tonight’s show Jo runs for study-body president and requests campaign assistance from Charlie. Meanwhile, Danny feels like he’s being haunted by Vikram.  Did you watch the last episode? If you want to get caught up, we did and we recapped it here for you.

On last week’s episode  a massive cover-up led Danny and Jo to wonder if someone was out to help or hurt them, and Kyle could not quell his suspicions that things weren’t at all what they seem. Danny came into a sizable amount of money, which puts the spotlight on him again in town and complicatesd his relationship with Karen. Jo confronted Tess about the tension between her parents and Tess dropped another huge revelation on Kyle.

On tonight’s episode Jo bonds with Charlie and realizes that she needs to move on with her life without Danny. Jo surprises everyone, including herself, when she decides to run for student body president, which complicates things with Rico, whose girlfriend Andie is also vying for the job. Danny is still haunted by Vikram, and Lacey, knowing something is up, confronts him about what he’s hiding. Jack’s daughter, Whitney, who has returned to Green Grove after being kicked out of boarding school, encounters Karen and strikes up a quick friendship with Lacey. The episode, titled Â’The Son Also Falls,Â’ was written by Ariana Jackson and directed by Teri Hatcher.

Danny and Karen finally had the heart to heart they should have had years ago. Because Karen knew her husband wasn’t a good guy but she never would have suspected that Vikram would set her son up for murder of his Aunt Tara. Vikram killed his own sister and then let his young son spend years in jail for the crime. The whole sordid tale disgusts Karen and she wished she had found out about it earlier. Like she told Danny – she would have killed him given half the chance.

So no she’s not hurt or ashamed of her son’s actions. He did what he had to but it will be for the best if they kept this story contained as much as possible. Karen thinks Jack was behind the cover up and that she’ll be able to handle him. While all Danny has to do is talk to Jo – tell her that his mother is taking care of everything to put her at ease.

Only those two  people and no one else. Karen doesn’t want him to rope someone else into this mess. Though she shouldn’t have told Danny to lie. He’s been lying for years and each time he does it; it starts to wear on him. So he attempted to give Lacey only a small part of the truth. She was getting on him about holding stuff in and it pushed him to reveal that he saw his father recently. Danny said he saw Vikram and they fought. The rest was however was filled in by Lacey.

She thinks its guilt that eating him up, but for all the wrong reasons.  In her mind she’s crafted a scenario where Danny is feeling guilty for not turning in his dad after seeing him because then his dad would still be alive. And because she’s worried Lacey tried getting help form Jo

That didn’t work! For the last couple of months Jo’s whole life had revolved around Danny and so she woke up from that after Vikram. That’s what worrying about him led her to; so it was time to start thinking about herself for a change. Or technically the person she wants to but never got a chance to try out.

Jo wanted to be more involved in student activities and sadly that didn’t pan out for her. Her ditzy guidance counselor, April, told her that was too late in the year to join most of the clubs or sports. It also make Jo look like she’s only doing this to look good for college.

So then Jo got to thinking that running for school president wasn’t a bad idea. But it was. Joe was too busy thinking about what she wants that she forgot that Rico’s new girlfriend Andie was also running for office. When she did get around to asking Andie told her it was fine but then again she’s a nice person so of course she wasn’t going to call out Joe for backstabbing.

Yet she has Rico for that. Rico watched Jo hastily making posters with Charlie and he knew that wasn’t her. So he confronted her on it. Jo wants to win in order to be someone different. But Andie wants to win because she wants to help people. Rico pointed out that she at least is thinking about others while Jo is merely being selfish.

Amidst of the elections, Lacey saw Danny with one of their teachers and just the look of it stayed with her. She thought it was suspicious but didn’t realize that Danny had bribed a teacher into changing his grade until they went out to dinner.

Danny was paying lavish attention on her with a fancy restaurant and the most expensive meals on the menu.  Then she remembered to check her test scores. Lacey has been studying all week and all she was a B while Danny who hasn’t been studying got an A.

Well, that explained everything to her more than words ever could. Danny is trying to bribe her to stop asking so many questions the same way he used his trust fund to bribe his coach. Lacey has had enough and she told him that he couldn’t bribe her to keep quiet so it would be better if he started talking.

Danny told her everything and it broke the up. However Lacey didn’t break up with for killing his dad. She chose to end things after hearing yet again that he let Jo in and not her. She was tired of it and left him to go hang out at the diner.

She forgot that the diner was hosting a victory party. Apparently Jo figured out she wasn’t ready for the presidency and conceded to Andie. So it was Andie’s party that a crying Lacey crashed. Though she found a friend in the new girl, Whitney.

Whitney is Jack’s daughter and she’s recently moved in with her dad after facing some inappropriate behavior form her mother’s boyfriend.  Whitney knew everyone back when they were all kids but age has certainly done something different with her – that girl has secrets. And her untimely arrival has already stopped Karen from questioning Jack about Vikram. If it sounds like a bad omen…

Charlie found Jo after she gave up the presidency. They got to talking and then for some unknown reason he decided to only now be honest to her about his past. He told her he was in juvie and that he met Danny there. But then he added more to his story. He told her that Danny once promised to kill his father the moment he got out of the juvie. Now why would he say something like that?

If he did it to drive a wedge between Jo and Danny then it worked. Danny went back to her place after his fight with Lacey. He needed someone and thought maybe he should give Jo a chance for something more.

Jo has been dealing with her parents’ drama so to see Danny “use” her like his dad did to her mom was the last straw. How many other times Danny has manipulated her? Did he set out to kill his father and was she just his pawn to commit murder? This is what Charlie and Danny’s lies have made her think. So she’s done!

And Danny has to work things out for himself this time. His friends aren’t going to be around to help him anymore!