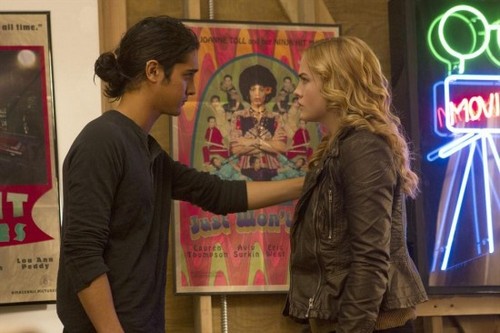 Tonight on ABC Family TWISTED returns after its winter hiatus with a new episodecalled, “Danny Indemnity.”  On tonight’s show A secret gets buried in a mysterious cover-up.  Did you watch the last episode? If you want to get caught up, we did and we recapped it here for you.

On last week’s episode Green Grove High celebrated Homecoming.  With the Homecoming dance quickly approaching, tension mounted between Danny and Lacey as Danny wondered if he can ever get over recent events. When Jo realized cute but nerdy Andie has a crush on Rico, she gave her friend the nudge he needs to make the first move. Danny recognized a familiar face in town and made a mysterious connection to his time in juvenile hall. Meanwhile, Jack moved in on a conflicted Karen, and Tess found it increasingly difficult to hide her secrets from Kyle.

On tonight’s episode a massive cover-up leads Danny and Jo to wonder if someone is out to help or hurt them, and Kyle can’t quell his suspicions that things aren’t at all what they seem. Danny comes into a sizable amount of money, which puts the spotlight on him again in town and complicates his relationship with Karen. Jo confronts Tess about the tension between her parents and Tess drops another huge revelation on Kyle. The episode was written by Andy Reaser and directed by Chad Lowe.

Vikram Desai’s bod has been found but not in the place where he was supposed to be. After Jo’s dad told her about finding Vikram she instantly got into contact with Danny. Danny was with Lacey at the time and had to come up with a pretty lousy lie to get away. Like that was suspicious. Later when he managed to catch up with Jo they went to the same cliff Vikram fell from and was scared to not to have spotted his body in the ravine below.

They didn’t move Vikram but someone did. And this helpful someone also took the time to stage Vikram’s death to make it look like an accident. Danny thinks it could be his mother. Kyle had needed her to identify the body and once she did Karen appeared so relieved. She even told her son that their life was going to be much better from now. He was a bit confused why she would say that when she then explained the whole 10 million dollar life insurance policy.

That’s why he thinks his mom did it. If she suspected he was the one that killed his father then she would naturally cover it up. Because he could claim all he wants that his dad’s death was accident but with the money in play it would have looked like Danny killed Vikram for the money.

However there in one other option to consider. If it wasn’t Karen that covered up Vikram’s death then it was someone else. Possibly someone who didn’t start all of this to protect Danny or Jo. This person could have done it to gain the upper hand.

Jo doesn’t want to go there. One bad guy was enough for her and she still doesn’t know what her parents were fighting about when she came home after the dance. All she was able to catch was that her mother has to give a statement and this was the night Vikram’s body was found. So it wasn’t that much of a leap to suspect maybe her mom hand in the cover up.

Imagine her disappointment when she learned she wasn’t that high up on Tess’s priorities. She got her mother to reveal then big secret and then couldn’t stop herself from resenting Tess for it. If Jo’s mother had only said something sooner than she and Danny would never have taken part in Vikram’s untimely demise. That’s the part she’s stuck on – everyone’s life could have been completely different if Tess had just said something.

And she’s not the only person blaming the last few days on Tess either. Tess confessed everything to Karen with an apology. Well, Karen didn’t think she should accept another woman (who was her husband’s ex-girlfriend) knowing her husband was actually alive while he let his real family believe he was dead. She’s not that evolved.

Karen is a simple person. As long as she has her son and access to money then her life is pretty much set. Sadly, she was misinformed about the how much of the windfall she was getting. Oh, Vikram was still insured for 10 million but he changed up his policy. All of the money is left to Danny with Karen acted as his guardian.

That doesn’t mean anything to Danny. He loves his mom and so he had no problem telling her to act like money was her own. Although didn’t quite expect her to go on a shopping so quickly after Vikram’s death. It’s as if she’s not even sad about it.

In a short period, everyone has begun to act crazy around him. His mother is enjoying the high life and everyone at school is suddenly acting like they never used to ostracize him. The money has changed the way people see him. And that includes Rico who couldn’t help joking about buying a private plane. Danny’s other friends ( like those he didn’t he had i.e. Andie and though would prefer to give the money to charity. Which gives Danny the idea that maybe that’s what he should do. He buys everyone a ticket to Tess’s charity auction hoping to put the whole mess with Vikram behind him.

Yet no one else reminds him about what he allegedly doesn’t deserve more than himself. Danny could have had a fun time if only he allowed himself to enjoy the way people were making fools of themselves trying to get on good side. Lacey found it funny but he couldn’t. He said it all felt fake to him with his mother probably acting the fakest. Karen showed at the auction dressed to the nines and loving her new found attention.

She knew that this was Tess’s auction but she wanted to show off. Quite a turn from earlier when she accused Tess of sleeping with her husband. So Danny threw a spanner in the workers. He essentially gave away ten thousand dollars knowing it would upset his mother.

Back at home is where lies stop. Tess never cheated with Vikram despite what Karen or her own husband for that matter thinks. She told Kyle about a favor she felt she needed to repay. That’s why she chose to help Vikram. During a split with Kyle she had learned that she was pregnant. Vikram helped her put her baby daughter up for adoption.

When she finally admitted it to Kyle he asked if there was a way to contact the adoptive family and she told him no. Vickram was the only one who knew what happened to the baby. Still Tess has lied before. Could she be lying again?

Then when Danny arrived home he also felt the need for confrontation.. He demanded only the truth from Karen from now on in. Then he said he knew she helped up cover up killing his own father.

But was it her or did Danny’s gut instinct lead him to the wrong assumption?