BY Heather DiPietro on July 28, 2014 | Comments: one comment
Related : Recap, Television, Under The Dome 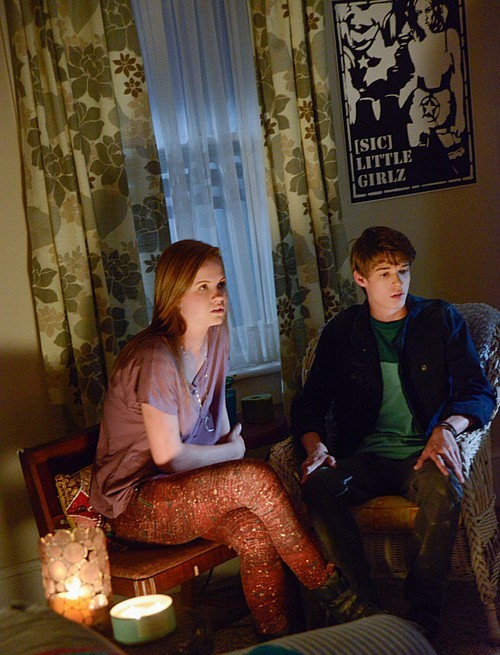 Tonight on CBS their drama UNDER THE DOME airs with a new episode called, “Reconciliation.” On tonight’s episode Julia takes over as the new leader of Chester’s Mill, after the town becomes divided over Big Jim and Rebecca’s population-control plan. Meanwhile, Joe and Norrie help Melanie search for clues about her identity at the dome wall.

On the last episode as conditions in Chester’s Mill worsened, Big Jim and Rebecca considered resorting to the extreme measure of population control, which drove a wedge between Barbie and Julia. Meanwhile, clues to Melanie’s past and her connection to the Dome were revealed. Did you watch the last episode? If you missed it, we have a detailed recap, right here for you.

On tonight’s show as conditions in Chester’s Mill worsen, Big Jim and Rebecca consider resorting to the extreme measure of population control, which drives a wedge between Barbie and Julia. Meanwhile, clues to Melanie’s past and her connection to the Dome are revealed.

This is definitely one series that you will not want to miss this summer. Don’t forget to stay tuned to Celeb Dirty Laundry where we will be live blogging every episode of Under the Dome’s second season all summer long.

Tonight’s episode of Under The Dome begins with Melanie waking up, Joe and Norrie are staring at her. She wants to speak to Sam, but they tell her that she has to wait until after Barbie talks to Julie. Meanwhile Barbie is at Julia’s house filling her in on all of the crazy details of Melanie’s past. Julia thinks it is crazy that Melanie was killed in 1988 and Sam may have killed her.

Same returns home and finds his house ransacked, he realizes that the journal is missing. But, he finds the pages he ripped out and hid in a wooden box. He finds Junior in the other room, and Junior wants to know where the pages are that were ripped out. He thinks that the predictions in the pages will tell him where Lyle is. He confesses to Sam that two days ago his mom sent him an email and she is still alive.

Julia and Barbie head to the diner, and sit down to eat with Melanie, Joe, and Norrie. Julia tells Carol that she is going to have to represent Big Jim and Rebecca at the trial. Julia tells the kids to lie low, and says that she will find some answers for Melanie.

Meanwhile Jim and Rebecca are sitting in their jail cells. They are arguing over whose fault it is that they ended up in jail. Julia and Barbie hold a town meeting, and Julia announces that they are running low on food and are going to set up a food-share program. They bring Jim and Rebecca out in handcuffs, and a brawl ensues. Wendell charges towards Jim and Rebecca and Phil shoots him in the chest and kills him.

They head back to the police station and Julia and Barbie confront Phil. Wendell wasn’t armed and he had no reason to shoot and kill him, not to mention Phil let Lyle escape on his watch. They force Phil to hand over his badge. Julie thinks that Barbie should be sheriff.

Sam takes Junior to the barber shop, and when he isn’t looking he plants the missing pages under one of the chairs. He pulls the pages out and pretends that Lyle hid them there. The two pages show a picture of Angie and a picture of “the four hands.” Sam says that Lyle must have killed Angie because she was one of the four hands, and he thought that killing the four hands would bring down the dome. Sam asks Junior if he knows who the other four hands are, and Junior says, “yeah…me, Norrie, and Joe. Lyle is going to try and kill us too.”

Norrie and Joe take Melanie to the outside of town, they think that if she puts her hands on the dome she can have a vision and get some answers. Melanie puts her hands on the dome and nothing happens. Melanie gets upset and calls herself an “undead freak.” Norrie says that if she could bring her mom back she would in a heartbeat, and she wishes Melanie would go back to that crater in the ground. Melanie runs off and Joe chases after her to comfort her, Norrie finds them kissing in the woods and she gets in to a shoving match with Melanie.

Meanwhile back in town all of the towns people are dropping off whatever food they have hoarded at their houses at the food-share program. Barbie and Julia are carrying all of the boxes of food in side and Barbie notices that most of the boxes are empty. Suddenly a bomb goes off inside the building, and it is engulfed in flames. Barbie, Julia, and Carol barely get out alive. They stand in the street and watch the building full of all of their food go up in flames.

Julia realizes that they are all screwed, and now there is hardly any food left. Barbie says that they might not be, he realized before the explosion that most of the boxes in the pantry were empty. He heads to the jail and asks Big Jim about the explosion. Jim says that he thinks it was Phil, he came to the jail and was upset about them taking his badge and the food-share program. Barbie isn’t buying it, but Jim says he should be ready for whatever madness Phil has planned next.

Carol catches Phil in the fire house. He moved all the food to the fire proof room before the explosion. Carol realizes that Phil knew the explosion was going to happen. She tries to run out of the burnt down building, but Phil attacks her.

Sam is trying to get up the nerve to smother Junior while he is passed out drunk on the couch, but he doesn’t have the heart to do it because Junior wakes up and tells him he loves him and says that he is the only family he has left.

Barbie heads back to the pantry and Phil takes Carol hostage and hold a knife to her throat. Carol manages to break free and Barbie shoots Phil.

Sam gets upset and throws the bottle of liquor at one of Junior’s mom’s paintings. It falls on the floor and they find another drawing hidden behind it. There is a number scribbled on the back, and Junior realizes that it is the same locker number where Angie was killed. He thinks that Lyle might be at the locker and they should go look.

Julia and Barbie hold a dinner at Andrea’s diner, and the whole town shows up, including Rebecca and Big Jim. Julia wants everyone to forgive Jim and Rebecca for scheming to kill them. And, Jim announces that he thinks Julia has done a “hell of a job” running Chester’s Mill.

Melanie confronts Rebecca at the dinner and asks her to look at a sample of her blood to find out whether she is human. Rebecca heads back to the lab in the high-school. She hears a noise in the hallway and finds Junior and Sam prying open the door to the locker where Angie was killed. They open the door and find a huge man-made tunnel going deep underground.