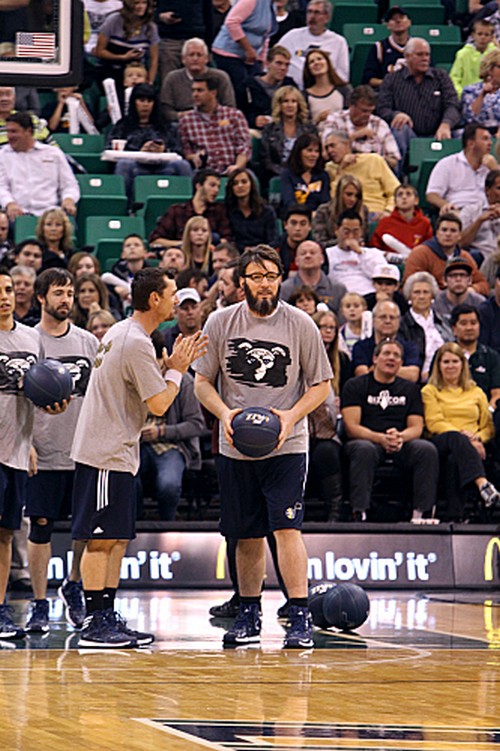 A whole new episode of the two-time Emmy Award-nominated reality series UNDERCOVER BOSS returns for another new episode tonight called “Utah Jazz.”  On tonight’s episode Greg Miller, CEO of the Utah Jazz, one of the most recognizable basketball organizations in the NBA, attempts to make halftime history.  Stay tuned as we live blog the episode with all the up-to-the-minute details.

On last episode Joe DiDomizio, President and CEO of Hudson Group, the travel retailer that operated in 70 airports and transit terminals in the U.S. and Canada,went on an undercover mission in his company.  Joe said about his experience, “Our employees are clearly the backbone of our business, and it was great to witness how their dedication to customer service is unsurpassed in the travel industry.”

On tonight’s episode Utah Jazz CEO Greg Miller became CEO not only of the Jazz but the head of the Miller family’s massive business conglomerate after his Dad passed away five-years ago.  Greg attempts to make halftime history when he works undercover with their infamous Dunk Team. Also, the boss’ team spirit is put to the test when he is asked to become a human basketball hoop as a member of the Interactive Team.

This week’s boss is Greg Miller. A business and proud family man from Utah. He’s taking the task to go undercover in and around basketball arena in order to keep watch over the family’s basketball team and hometown pride, The Utah Jazz. Greg is hoping that maybe he’ll finally get the chance to fulfil his father’s wish of making the Utah Jazz one of the best.

As recently as five years ago, he’s had to step up as the leader to his family conglomerate after his Dad suffered an early death. The older man had had Type 2 Diabetes and sadly did not look into better treatment for himself until it was much too late.

His son on the other hand has always believed his father’s early demise was due to too many years ignoring his disease that he only must have developed from stress. It seems Greg’s father actively pursued a dream of making the Utah Jazz team the greatest at sometimes too great of a cost to himself. Take buying the team for instance.

The team was going to be sold in the mid-eighties but his father fought to keep the team in Utah. Miller Sr. bought half the team one year and finished gaining the rest of the team by the next. The cost of all of it however far exceeded how much he was worth at the time. And still he was willing to risk it. Then coincidentally he received his diagnosis several years later.

Now Greg is going to leave his large family behind and try to make himself over as Mark – a hard-working labourer with a wife and four kids. Yet going undercover has its own risks. Sometimes the bosses don’t always see everything going the way they planned. Mark was helping to set up the arena for game when he started to talk to his immediate superior, Dennis.

Dennis was taking certain short cuts he shouldn’t have and there were often times “Mark” caught himself wishing things could be done differently. Fortunately, he managed to keep his opinion to himself. Although he was a little bit noisy. He got Dennis to open up about what it’s like working for the company for the last decade which was perfectly fine but he then probed into the other man’s family life.

Well, Dennis has had to take on another job in order to pay off medical fees. His wife was diagnosed with diabetes and “Mark” let it slip that his own father suffered from the same thing. The two were able to bond over it and Mark truly felt sympathetic to Dennis’ situation. It’s possible that Dennis is running himself ragged just to keep up with the bills.

The same can be said for what looks like plenty of his employees. When Mark was in charge of cheering up the crowd he found out his supervisor was a very nice young lady. She appreciated her job and was actually better at it than he was. But like Dennis she’s had to deal with financial restraints

Even the Dunk team isn’t stepping away from the table with much. They get mostly paid in new gear such as sneakers and t-shirts. “Mark” has never paid attention to the Dunk team before and so he didn’t know that was how they were getting by for their services.

The last task he had to work though was at the concession stand. Under his new friend’s Manny’s tutelage, he found his spirit rising. Throughout his time at work “Mark” has always found himself slightly embarrassed. He’s usually not someone that actively seeks the limelight and when he’s gotten attention all day; it at times became awkward for him. Manny put an end to that.

Manny saw how “Mark” was struggling at the concession and so he created competition. Whoever sold the most chicken fingers would get free ice cream. That got “Mark” interested in doing his best and he ended up winning.

Manny didn’t mind buying “Mark” ice cream. By the end of the day they became fast friends.  “Mark” found out that Manny was currently living with his dad and step mom. His mother and several other family member had all perished in the same car accident. And for someone so young to lose that many people and still be optimistic was something else. Especially to “Mark”.

Greg, back to his normal attire (no beard and no fake stomach), met with each of the people of the people he worked with. For Dennis he was promoted, given a new car, and had his medical bills paid off.  Greg picked up a few things from Dennis and he felt the other man was best capable to oversee the new safety regulations he was going to implement.

For Amber – she got her family’s medical bills paid off as well. Her mother was under a lot of pressure to pay off her disabled brother’s bills and thanks to Greg they were able to get a reprieve.

Then there was Matt. He has his two kids on either side of the country. Matt hadn’t the chance or the means to bring all together for some time until Greg decided to help him out. He offered up box seats to both kids so they could see their dad at work. Also he gave each child 10,000 dollars to go towards their college fund.

And finally Manny. After Manny finishes high school he’s going to find a fully funded college fund waiting for him. It seems and Greg really did become friends because Greg wanted to sit next to him in the front row during a Utah Jazz game. In return Manny wants to grow up and be just like Greg. He’s planning on majoring in business.

All in all it was not bad thing to find themselves working for Greg Miller.