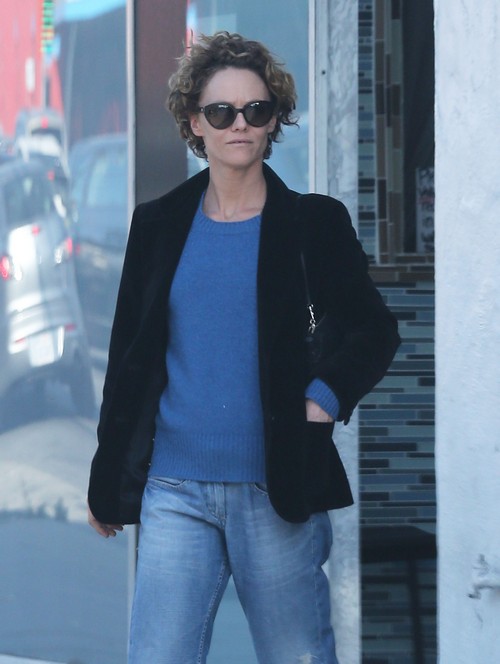 Vanessa Paradis has never really been a household name in the U.S. And people that know who she is associate her with Johnny Depp. The two were together for well over a decade and have two kids that they are now attempting to co-parent. Johnny split with Vanessa nearly two years ago in order to be with Amber Heard who is now his fiance. While Vanessa claims to be happy for her ex let’s be serious, the whole situation obviously stings.

She waited 14 years before realizing that he was never going to wife her and now after under two years he is ready to walk down the aisle with the much younger home-wrecking gold digger Amber. Ouch! Vanessa was spotted out in L.A. This weekend with her son Jack and to be honest, I would never have recognized her now if not for the photo caption. She has cut off her long hair and seems to have gained a tiny bit of weight. The usually boho looking Vanessa now resembles a dude- or Meg Ryan before Meg was a poster child for plastic surgery gone wrong. Vanessa looks a bit haggard and depressed.

Meanwhile in NYC Johnny and Amber have been photographed out looking fabulously happy and pulled together. Clearly Johnny thinks he is the winner in this high profile bust up.

Editor’s Note: Isn’t it ironic and disgusting – Depp always pretended to be the non-conformist, Mr. Cool – yet ended up doing the most typical conformist patriarchal thing in the world – dumped his long-suffering middle-aged baby mama to hookup and marry a young bimbo.  Depp’s true colors are ugly and selfish. Tell us your thoughts in the comments below!