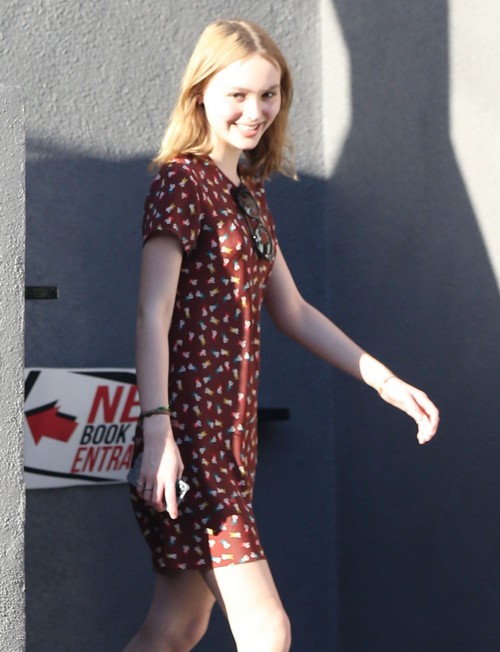 It’s amazing how sometimes people that appear to have everything in actuality have nothing. Take Lily-Rose Depp for example. She is the eldest child of Johnny Depp and Vanessa Paradis and at least on paper she is living a charmed life. Her dad makes sure that her allowance is huge and has a bodyguard to protect her. Meanwhile mom is a free spirit that doesn’t seem to value rules very much so Lily-Rose has her freedom. Her life would appear to be what most teen girls dream of- endless shopping trips and no curfew. But have you taken a good look at Lily-Rose? This is not exactly a happy girl.

Since her parents split a couple of years ago Lily-Rose has been pegged as a wild child but what she really looks like is a sad little girl more often than not. Quality time with her father has been scarce and while we have seen her out shopping with new step-mom to be, Amber Heard, who knows how they really get along. Amber isn’t a whole lot older than Lily-Rose so at most she probably feels like an older sister more than a mother figure.

Vanessa, Lily-Rose’s mother doesn’t exactly set the best example. While she claims to be happy for Johnny and Amber you can’t help but think that there is more than a tinge of bitterness there. She has had a revolving door of younger men ever since splitting from Johnny and that certainly has to affect Lily-Rose’s sense of stability. Do you think that she is falling into the typical trappings of young Hollywood as has been rumored? Or is this teen just looking for a lifeline to feel normal again? Tell us your thoughts in the comments below!

Johnny Depp’s daughter Lily-Rose Depp and her bodyguard stop by a bookstore in West Hollywood, California on March 16, 2014