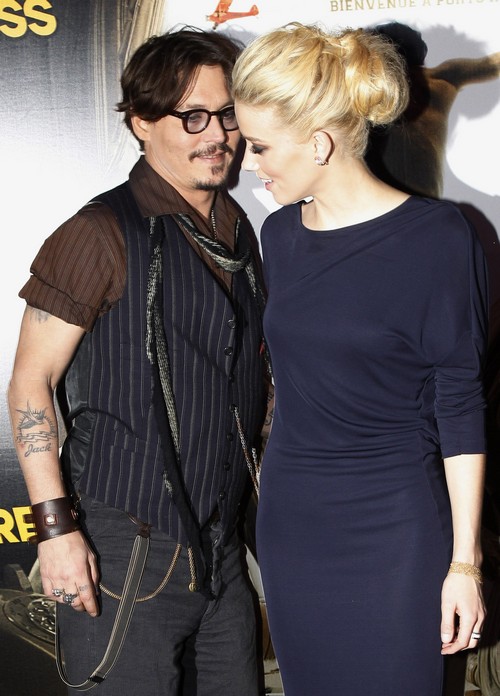 Amber Heard and Johnny Depp are officially engaged. Well, duh. Amber made a big deal out of not showing her ring finger to anybody while out at a restaurant last week, sparking rumors that she might be engaged. Then, she and Johnny made their first awards season debut as a couple at the Golden Globe Awards, leading to further speculation on the status of their relationship. And now, it’s confirmed – they’re actually engaged.

A source tells US Weekly, “The proposal happened a while ago. She just didn’t wear the ring.” Hmm. I don’t believe that, sorry. If Johnny Depp proposed to Amber Heard a ‘while ago’, I don’t believe that she would have been able to keep it a secret for this long, especially not with awards season in full swing. Amber’s career is down the drain, and she’s desperately in need of some strong publicity – an engagement to one of the most eligible men in Hollywood will obviously help her chances of staying relevant.

For those who haven’t been keeping track of the epic romance [we kid] that is Johnny and Amber, here’s a quick recap. They met on the set of the Rum Diary, where rumors immediately abounded that Johnny and Amber were hooking up, and Johnny was having difficulties with Vanessa Paradis. Then, Johnny announced his separation from Vanessa in early 2012, and then he and Amber confirmed their relationship in June of 2012. Vanessa is pissed!

To be completely honest, I’m surprised Johnny and Amber have lasted this long. When they initially got together, I gave them a few months at best, but they’ve surprised everyone and stayed together for much longer than that. But will they last through an engagement and marriage? We’ll have to wait and find out.