The Walking Dead Spoilers: Why Do We Love Daryl? 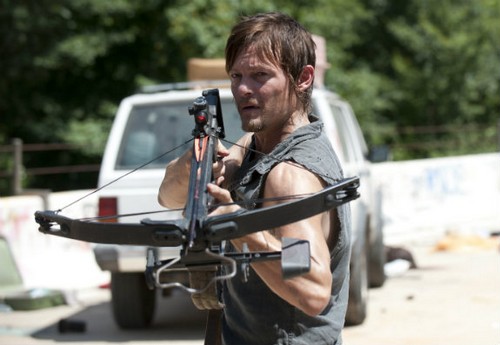 The Walking Dead spoilers are always searching for a good story about one of our favorite characters. It’s no secret that Daryl Dixon (Norman Reedus) is by far a favorite — if not THE favorite — character on The Walking Dead. What is it about this redneck zombie killer that makes us love him?

As humans, we tend to gravitate toward other people. It’s just sort of how we do things. We tend to need other people. Daryl seems to do just fine on his own. That’s intriguing. The fact that Daryl doesn’t seem to need anyone and seems content to be alone draws us in. We can’t help it. For the most part, people seem to need to fill a void — whether it’s the voice of silence or the void of presence. Because of that, we are naturally attracted (or repelled) by anything or anyone that goes against that norm (no pun intended). Daryl seems to be content in both silence and solitude.

Admit it, you love bad boys. Perhaps it is his lack of being chatty or his penchant for going off on his own, but fans of “The Walking Dead” view Daryl as a bad boy. Oh it’s not that he’s always doing bad things, it is his aloofness that seems to earn him the title. Perhaps it is also that he was associated with his brother Merle, who epitomized the bad boy persona, but certainly not in a good way. Maybe Merle gave us a look at what Daryl could be, but his own personality and morals have kept him from becoming like Merle.

He Has a Hidden Sweet Side

Daryl actually has a very sweet side, and we love it. Underneath all that grungy redneckedness, Daryl has a kind soul. We first saw it when he set out to find Carol’s missing daughter, Sophia. Of all the people in that ragtag group to be affected by one lost little girl, Daryl was not exactly who we expected, right? As we watched Daryl open up to Carol, it made us see even more that a character we all thought to be very flat was actually full of depth.

Admit it: You love the crossbow. At the beginning of the series, we saw everyone else running around with guns, but not Daryl. Daryl went up against the zombies with a crossbow and some arrows. The crossbow is iconic and it has become an integral part of the show.

Daryl is certainly a star in his own right as far as “The Walking Dead” fans go. He may be one of the few untouchable characters on the series and his popularity continues to rise. Show a few more scenes of him getting in touch with his sensitive side and the fans will explode in swooning frenzy. As more and more of Daryl is revealed, it is likely that his popularity will grow even more — if that’s possible. Either way, Daryl is a beloved character on the series and we just love him.