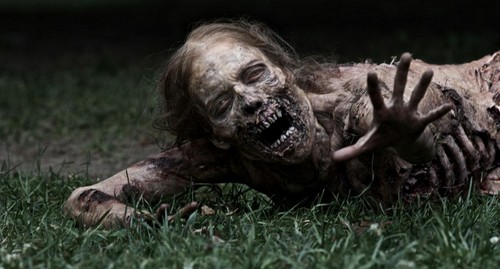 The mid-season finale of the Walking Dead left us shell-shocked and desperate for more, and the return date is finally approaching. The show will come back to AMC on February 9th with Episode 9 of Season 4, and it’s guaranteed to be a doozy, especially if the promos are any indication. Several new trailers have been released over the last week, with the latest titled ‘Not Afraid‘.

The video shows several quick shots of all of our main characters, and they definitely look a little worse for wear. However, the scariest shot comes courtesy of Maggie, who seems to be fighting off a walker in very close quarters.

We already know that the Walking Dead isn’t scared of killing off main characters, and in fact [spoilers ahead], they’ve already managed to wipe out several major cast members since Season 1 – including, but not limited to, Dale [Jeffrey DeMunn], Andrea [Laurie Holden], Lori [Sarah Wayne Callies], Shane [Jon Bernthal], and Hershel [Scott Wilson]. And there have been lots of rumblings of another shocking death left in Season 4, which means that another one of our dwindling main cast could be next to go.

Really, we have very few characters that fans still care about. Sure, Tyrese and Sasha seem great and all, but will anyone really be sad to see them go? Yeah, not really. But we still have Daryl, Carol, Rick, Carl, Glenn, Maggie, and Michonne. And according to recent reports, one of these main characters will die – and it will be a character that is supposedly still alive in the comics. In the current comic issue, the only main characters that are still alive are Rick, Carl, Michonne, and Maggie – and if these rumors are true, that means that one of these four characters will die. Seeing as how Rick and Carl are the main focus of the show and Michonne just got introduced, it’s looking more and more likely that Maggie’s going to be the one to go. I desperately hope that I’m wrong on this because I will be curled in a ball and sobbing if she dies, but you know the show’s not going to end this season without killing off someone else. So although I’m hoping that rumors are just rumors, the buzz surrounding this particular rumor means that there’s probably something to it.

What do you guys think? Will Maggie die by the end of Season 4? Or will it be another character? Let us know your thoughts in the comments.