BY Kristine Francis on May 23, 2014 | Comments: one comment
Related : Reality TV, Recap, Television 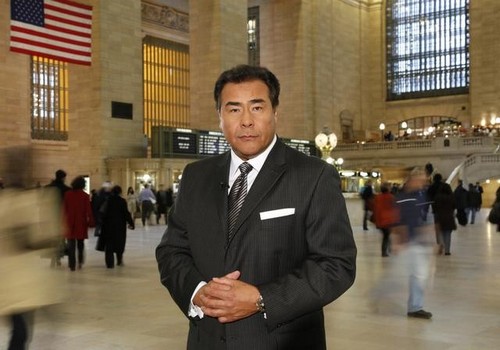 ABC’s What Would You Do? returns tonight with a new season premiere.  On tonight’s episode Daymond John appears in a scenario as a shopper who is being scrutinized at an upscale clothing store. Also: An intoxicated couple prepare to take their boat for a cruise; a teen basketball player tells his teammates and coach that he’s gay; a diner at a restaurant takes food from another customer’s plate; and a homeless man is asked to leave a bar in New Orleans.

Using hidden cameras, “What Would You Do?” establishes everyday scenarios and then captures people’s reactions. Whether people are compelled to act or mind their own business, John Quiñones reports on their split-second and often surprising decision-making process.

On tonight’s episode racial Profiling While Shopping: Will anyone shopping at an upscale clothing store come to the defense of an African American man wearing a hooded sweatshirt who is being scrutinized? Boating Under the Influence: While dining at a dockside restaurant, a clearly intoxicated couple talks about how they are going to spend the rest of the day cruising around the bay with their child will someone stop them? Gay Athletes: Just this month, the first openly gay football player was drafted by an NFL team. But what will happen when a teenage basketball player is with his teammates getting a pair of sneakers in the store when he decides to come out to them? Find out tonight.

Tonight’s season premiere looks like it is going to be amazing, so be sure to tune in for our live coverage of ABC’s series at 9:00 PM EST! While you wait for our recap hit the comments and let us know how excited you are about this series so far.

‘What Would You Do’ calls into question how far the everyday person is willing to extend themselves for someone else but most of the time the show tends to showcase ‘What Wouldn’t You Do’. Using a variety of hidden cameras – the show often throws people into scenarios were they confronted by the ugliness of others and either can choose to be the better person or the one that walks away.

Recently there have been complaints and social uproar all across the U.S. about Department stores and their policy to racial profile their customers. In these situations the sales person and/or manager enact on said policy to sometimes follow or harass black men merely because of the color of their skin and the assumption that these “types” of individuals would be unable to afford high price items. Because of this belief, which tends to seemingly fit all men of color according to the racists in charge, the President of The United States has even had to come out to make a statement about his own youth.

So on ‘What Would You Do’, John Quiñones teams up with Shark Tank’s very own Damon John to learn how far a bystander is willing to let such blatant disrespect go before they either step in or chose to walk away. And you’d be surprised about those that have stood up and those that chose to remain silent.

The people that did step in or at the very least complained about the sales person harassing the black shopper simply because he found the man’s persona to be too urban for the store were two young Caucasian women, a few black men, and even a couple stood out in defence. But there was another couple that chose not to say anything. They stood by in silence as the man in question was followed, harassed, and still refuse to utter a word even after witnessing a pat down.

When Damon John took on the role of the “urban” shopper; he took a great deal of pride in another man stepping in to defend him. The other man was black as well and wearing a suit yet the sales person called the other man his normal type of customers. While Damon John who was in jeans and fake dreads was obviously “better off” at a discount store.

But the man in his nice suit knew all too well what profiling felt like and so he stepped in. For him, it was the color of his skin that led to him being harassed and that’s why he felt the need to defend Damon John.

The next scenario for the show is Boating Under the Influence: While dining at a dockside restaurant, a clearly intoxicated couple talks about how they are going to spend the rest of the day cruising around the bay with their child will someone stop them? Well, apparently over half of the witnesses would step in.

The actors used as the family were good, but in some cases they allegedly weren’t good enough. One man who saw the clearly drunk father tried to warn the man off and when that didn’t work – he then tried to convince someone else to step in. At this point John came up to reveal himself and the hidden cameras, but do you know what the excuse the witness used in not being vigilant enough with the family was – he said he didn’t think the father could be that drunk after three shots and had wondered if he was faking. Ok, go with that!

Even though other people who saw the same man become “intoxicated” after so few shots still tried to if not vocally then physically stop the family from leaving. They were more concerned for the family and in particularly the young son’s well-being than they were about how much of a lightweight the father was.

As for the third scenario – it’s bizarrely about food. The show sent an actress into a restaurant and she bizarrely goes around asking to eat off of other people’s plates. At first the other customers think she was just being indecisive and after a while they start to think that something might be wrong with her north of the border.

There were people that did offer her a taste of their food however they quickly changed their mind once she started to come back for seconds. And the final action that pushed practically everyone over the edge was when the young woman started to take food off of someone’s plate while they were I the bathroom. That’s when everyone had enough of her and called for the manager.

She was just too annoying to be ignored!

It takes a lot to elicit strong reactions reaction from strangers. When a few people overheard a young man come out to his friends they swiftly stepped in to defend him against these friends’ slurs. With the first ever openly NFL player out on the field – What Would You Do wanted to know how people would react to hearing a teenager tell his teammates he was gay and then they made the friends and even a coach pretend to bash him just in case the disapproval couldn’t stand alone. And the amazing thing is – everyone came to this young man’s defense.

They stepped in to make sure he was ok even if his friends refused to listen to reason and when asked why – they said they didn’t want this man to feel beaten up or hated. They wanted to reassure him that it can get better. Or else they would have been scared for him and what he could possibly do to himself.

Lastly there was a homeless man that was given money to go buy food at a bar. The man came in with cash in hand and the bartender was supposed to refuse him. And the bartender didn’t stop there. Not only was the homeless refused, but he was also insulted and basically called worthless in front of a crowd. Yet despite that only few defended him or made sure he got something to eat.

The tourists ignored him and even a man by himself (with no obligation to anyone else) ignored him. But with the bad comes the good. His champions were probably the most vocal out of everyone on the show tonight. They made sure to complain about the bartender and in one case a perfect stranger acted as a human shield against the bartender’s intolerance.

So kindness amongst strangers does exist even till to this day albeit not as much as we would wish!