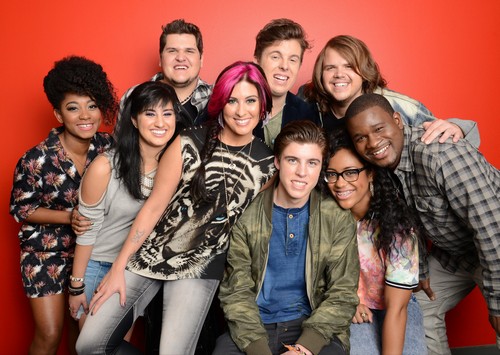 Tonight on FOX AMERICAN IDOL returns with the results show. One finalist out of the top nine is eliminated in a results edition. Also: Janelle Monáe performs. Did you tune in to watch the performances last night? If not we did a detailed recap of it all for you right here.

Last night the top nine contestants took the stage and had a chance to own the spotlight. Season 13 is really heating up and the remaining 9 singers performed on the “(I’m With The) BAND!”– themed performance show. The IDOL hopefuls acted as the lead singer for Rickey Minor and his band.  Caleb Johnson, Jessica Meuse, MK Nobilette, Alex Preston, Dexter Roberts, Majesty Rose, Malaya Watson and Sam Woolf, C.J. Harris and Jena Irene all performed, performing their favorite songs.  We also have all the videos of last night for your enjoyment.

On tonights first half-hour live results show we find out who will be sent home. Plus, for the very first time, Grammy Award-nominated pop star Janelle Monáe will perform her new single, “What Is Love,” from the album “Rio 2: Music from the Motion Picture.”

Tonight’s American Idol Elimination episode kicks off with footage of the remaining 9 contestants out to dinner last night discussing their thoughts on last night’s show. They joke about Harry Connick Jr stealing Ryan Seacrest’s shoe and how Jennifer Lopez actually said that Caleb Johnson was sexy.

Ryan Seacrest takes the stage and reveals that Malaya Watson and Jena Irene are safe this week according to America’s votes.

Next singer Janelle Monae takes the stage to perform her new single “What About Love.”

After Janelle’s performance Ryan Seacrest joins the remaining seven American Idols on stage and reveals that Alex Preston, Jessica Meuse, Caleb Johnson and Dexter Roberts are all safe according to America’s votes.

The Bottom Three contestants tonight are Sam Woolf, Majesty Rose, and CJ Harris. After the nationwide vote …CJ and Sam are safe.

Majesty Rose received the least amount of votes and is up for elimination. She has one last chance to sing for the judges and see if they will use their save vote on her.

The judges listen to Majesty perform one last time and then they deliberate over whether or not they will save her this week. The judges’ decision has to be unanimous, and according to Keith it is not unanimous. The judges do not want to use their “Save Vote” on Majesty, she is officially eliminated from American Idol.