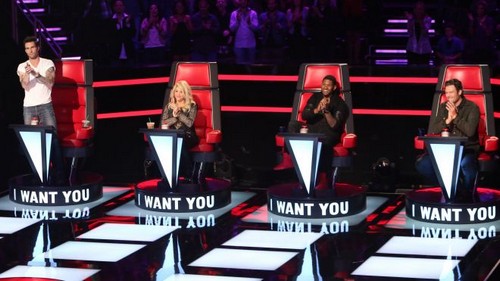 Tonight on NBC the Emmy award winning music competition The Voice will air its Live Eliminations, vocalists with the least number of votes are revealed. At the end of the evening we will find out which singers are advancing to the final performance show.

On last night’s episode the remaining five artists: Josh Kaufman, Kristen Merlin, Christina Grimmie, Jake Worthington and Kat Perkins perform live in front of coaches Adam Levine, Blake Shelton, Shakira and Usher. As well, eight-time Grammy Award-winning artist and “Voice” coach Usher performed, for the first time live, his brand new single, “Good Kisser.” Did you watch last night’s episode?  If you missed it we have a full and detailed recap, right here for you.  Did you miss any of the performances?  If you did we have all the videos of last night’s performances, right here.

On tonight’s episode the artists moving on to the final rounds will be revealed. One artist will be one step closer to being named “The Voice”.

Tonight’s Live Semi-Final Results is going to be exciting. It will give viewers a good idea of who may actually be in serious contention to win THE VOICE this season so you’re not going to want to miss even a minute of the fun. We’ll be blogging it right here for you. In the meantime hit up the comments section and tell us your thoughts on the Live Semi-Final Results.

The first artist making it to the top three is Jake Worthington.

Adam says that he stands by his risky performances last night, he believes in his girls and that they should move forward. Shakira says she is so happy that Kristen has made it so far, if she made it to the finals she would be so excited and happy. Usher says that Josh has to be consistent and believes he is so versatile; he knows he’ll make it. Blake says that he is so happy about Jake moving on, he will be celebrating tonight.

Next up is Jaquie Lee singing her own single “Broken Ones”.

Will Champlin is now on stage performing his own song “Eye of the Pyramid”.

The next artist moving on to the top three is Josh Kaufman.

Next up is Tessanne Chin singing her song “Everything Reminds Me of You”.

First up to sing for their life is Kristen Merlin sining “Blown Away”.

Blake says that he always had a soft spot for her, she is the only other country singer and has to say it has been amazing to see how her and Shakira have been doing so well; he is pulling for her. Shakira says that Kristen is a story teller and believes every word she says as she sings; you’d recognized her voice on the radio because of her unique voice and she deserves to be here next week.

Next up is Kat Perkins singing “Good Girl”.

Usher says that she has been in this spot before but once again proves how comfortable she is on stage and brings the whole thing to life; he hopes America sticks with her. Adam says it’s a shame for her to be here again, but Kat always comes up singing and having the time of her life.

Next up is Christina Grimmie with “Apologize”.

Adam says that if Christina gets to the finals that he knows she will win the whole show without a doubt.

The last person moving on to the top three is Christina Grimmie, Kristen Merlin and Kat Perkins are going home.