Who Will Win The Voice Final Season 6? (POLL) 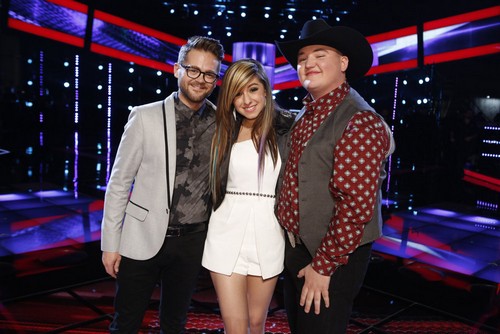 We’re down to the final three and it’s only a matter of time before the The Voice season six winner is crowned. Who is it going to be?  Has your favorite lasted long enough to be crowned the winner? Tomorrow night host Carson Daly will reveal who America has chosen to be the season 6 winner of The Voice by the end of the evening.

This season has been the singing reality shows best season ever.  The talent gets better, season after season and it is difficult to predict who will be chosen tonight as the ultimate voice.

Tonight, the final three artists performed for coaches Adam Levine, Blake Shelton, Shakira and Usher; Team Adam – Christina Grimmie, Team Blake: Jake Worthington and Team Usher: Josh Kaufman.  Did you watch the episode? If you missed, we recapped it right here for you.

On the Season 6 finale part 1 each of the contestants: Jake Worthington, Christina Grimmie and Josh Kaufman performed 3 songs.  If you missed any of the performances we have all the videos, right here for you.

Who is your favorite of this sixth season? Now is your chance to let us know by doing your part and casting a vote below. Also, be sure to click on the link above to see their performances from this week and last week!