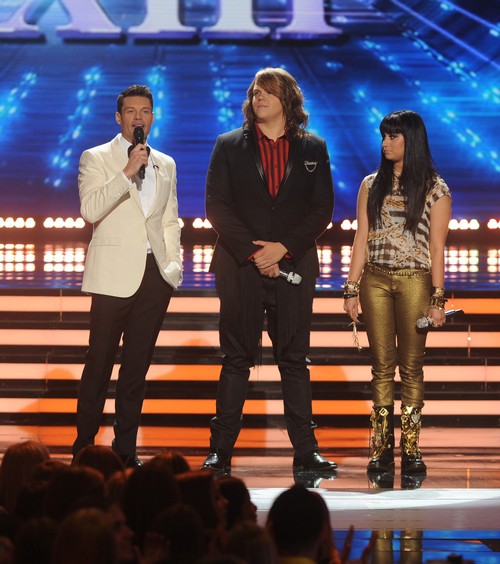 Tonight on FOX AMERICAN IDOL returns with the finale and we will find out which contestant was sent home.  Did you tune in to watch the final performances last night? We did and have a detailed recap of it all for you right here.

Last night the top two contestants took the stage and had a chance to own the spotlight.  Season 13 is really heating up!  The final two are Jenna Irene and Caleb Johnson, one of them will be the American Idol of season 13 which will be announced this evening and the other will be going home.

For her original song Jena sang “We Are One.”  [VIDEO HERE]  The judges had this to say about her performance.   Jennifer – “Jena! I never heard your song and I thought you were really good.” Harry – “I was wondering what that song would sound like live and it sounded just as good as it did in the studio.” Keith – “I loved the song Jena, it’s perfect for you. It’s great, loved it.”

For his original song Caleb sang “As Long As You Love Me.”  [VIDEO HERE] The judges had this to say about her performance.  Harry – “So, the way I look at it, you’re going to sleep tonight. You are like Joe Frasier. And, Jena Irene is Mohammed Ali.” Keith – “This is insane. After all of the performances tonight, I am dying to see what happens tomorrow. Congrats to both of you.” Jennifer – “You probably won’t sleep tonight, but you should, because you gave it your all. It’s going to be a tough night for everybody. Good luck America!”

On tonight’s live results show, tune in to find out who will be sent home, because by the end of the evening we will have our American Idol.

Tonight’s season finale of American Idol kicks off with the Final Two contestants Jena Irene and Caleb Johnson taking the Idol stage to perform “We Will Rock You.” When they are done host Ryan Seacrest takes the stage and introduces American Idol judges Jennifer Lopez, Keith Urban, and Harry Connick Jr.

Next ex Idol contestant and fan favorite Sam Woolf takes the stage to perform “Home,” accompanied by American Idol alum and previous winner Phillip Phillips. The next act to take the Idol stage is Jennifer Nettles performing her hit song “That Girl.” Jessica Meuse joins her on stage for a medley of “Wrecking Ball.”

American Idol judge Jennifer Lope performs next seeing her next hit titled, “That Love.” When Jennifer is done salsa dancing off the stage, finalist Caleb Johnson takes the stage to perform along side the legendary rock band Kiss. When they are done Ryan Seacrest brings Caleb’s brother Houston up on stage to meet the band since he is a die-hard fan.

The next performer to take the Idol stage is Idol Blacc performing “Tell Everybody” and he is accompanied by all of the Idol guys from this season: Sam Woolf, Caleb Johnson, CJ Harris, Dexter Roberts, and Alex Preston.

Next Ryan Seacrest shares a clip of Caleb and Jena Irene, they both were given brand new 2015 Ford Mustangs. Caleb and Jena bring their mentours from back home up on stage, and reveal that they are giving them each a 2014 Ford Fusion.

Demi Lovato performs next along with all of the American Idol girls from the Top 20 this season including finalist Jena Irene. When Jena Irene finishes her set with Demi she changer quickly and returns to perform with her favorite band Paramore, and sing their hit song “Ain’t It Fun.”

The next duo to take the stage is John Legend and Top 20 American Idol finalist singing his hit song “All Of You.” Top 3 finalist Alex Preston performs “Love Someone” next with his idol Jason Mraz on the American Idol stage.

American Idol host Ryan Seacrest decides to do a little singing himself and joins Richard Marx on stage to sing “Right Here Waiting For You.” And, now we know why Ryan Seacrest sticks to hosting.

Up next is a very special performance you could only ever see on American Idol.  Judges Keith Urban, Harry Connick Jr., and Jennifer Lopez along with mentor Randy Jackson all take the stage to perform “Your Own Way.”

It’s finally time for the American Idol Finale results.  According to America’s votes the winner of  Season 13 of American Idol is Caleb Johnson.