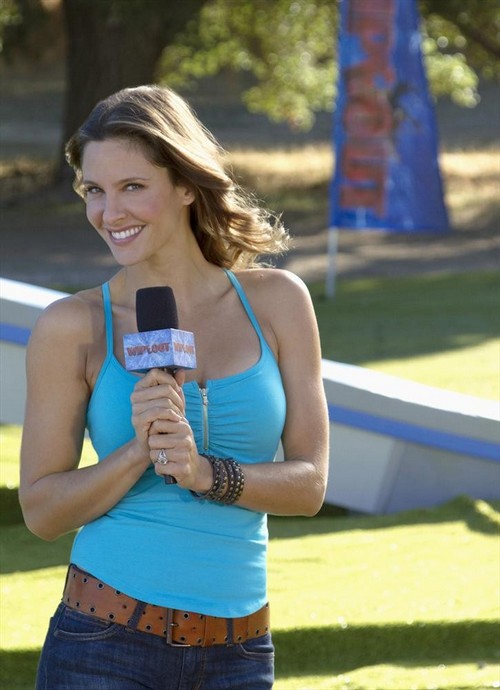 Tonight on ABC thier hilarious game show WIPEOUT is back with a new episode called, “All-American Wipeout.” On tonight’s show a patriotic-themed competition features contestants, including “The Mulleted Menace,” “Patriotic Pants” and “Backyard BBQ,” all trying to conquer a space-race obstacle in order to win a seat at the Thanksgiving dinner table.

On the last episode it was Hotties vs. Nerds on “Wipeout” which included 24 contestants; “Nordic Beauty,” “Sir Jock or Not” and “3-D Prince” were dining at the “Robo-Bistro” and took a trip to the outer orbit on “Space Race.” The top 4 contestants moved on to face the Wipeout Zone, but only 1 walked away with the cash prize and a spot to compete in the epic “Tournament of Champions” battle at the end of the season. Did you watch the last episode? If you missed it we have a full and detailed recap, right here for you.

On tonight’s show Wipeout celebrates America with its very own amber waves of pain on an all- new “All- American Wipeout.” The qualifier round will kick off this spirited competition as our 24 All-American contestants, including “The Mulleted Menace” and “Patriotic Pants,” confront the “Backyard BBQ” and “Baseball Bash.” The patriotic celebration continues as they conquer the “Space Race,” but only 6 contestants will be able to move on with a seat at the Thanksgiving dinner table. The top four to survive will be stuffed with a ticket to the Wipeout Zone, hoping to earn a big stack of All-American cash and a spot in the “Tournament of Champions” at the end of the season.

RECAP: First up is Linsay Berkebile; she runs and wipes out right away on the first course getting smashed in the face; on to the sucker punch wall she is launched right into the mud. Now at the big balls she almost makes it to the fourth, now she hits the slide and wipes out completely; now on the last course she misses the last jump and smashes into the platform. Coming in at 4:41.

Now it’s Malik Rashid, he hus huge muscled legs and he’s close to the end of the last course; but wipes out completely.He makes it in at 4:14 as the new leader.

Now it’s Roxy Goldstar, she almost makes it down theslide though smashes right into the platform failing. Now it’s Casey Bollinger and she has never seen the show; she doesn’t own a TV. She beats the motivator but smashes into the big balls and wipes out. Thought DJ Fish Food makes it in at the fastest time of 2:30, swimming fast as he wiped out.

Next up is Ebony and she was doing well but got smashed in the face hard on the first course; she gets to the sucker punch wall and takes one right into the face. Now to the big balls, she made a good start but face plants into the third ball. Now it’s Alex Gross, he has a mullet because he believes it will help him get girls. Alex is on the slide and totally flips into the water; now he’s at the end and makes a miss step into the water, he makes it to the end with a time of 3:09.

Next up is is Gwen and she is struggling on the first obstacle, though she is launched into the air and into the water fast. The final ocnestant is Tommy Tetrick, he loves the food of America; he is on the big balls and actually completes it thought wipes on the last course. Making it at first place.

Alex slides down and wipes out instantly, Malik went through the whole thing really fast but right at the finish line he wipes out horribly. He wipes a second time when trying to get to the platform, Lindsay makes it first though. Malik is back and makes it his third time. Alex lands the jump and makes it through, following with Dj Fish Food. Gwen and Casey are the last two to beat the course.

Next we have out contestants at the Purple People Beater, Fish Food and Malik both fail instantly not making it to the platform; Lindsay looking confused gets hit by a sweeper and wipes out. Gwen gts pushed right into the sweeper by Lindsay sliding into her; Malik then slides into Lindsay and throws her into the water. Malik makes it to the next part and has a pie thrown at him which he grabs and eats it. Alex makes it through; Malik is the third man through. Lindsay then makes it and now were at the final pers; DJ Fish Food makes it.

Now we are at the last course, the first contestant taking it on is Lindsay; she blasts into the ocourse and reaches the shredder. She gets inside but drops out of it fast, swimming on to the sweepers; Lindsay doesn’t get far and is thrown right back into the water. Now at the gears and completely wipes at 3:26.

Now it’s Horse Legs Malik to try and beat Lindsay, he is shot through the sky and wipes at the Shredder, now at the sweepers he wipes right at the last platform; he gets to the gears Malik beats Lindsay as the new leader.

Now it’s DJ Fish Food, he’s in the cannon ready blast off; he does a complete flip into the water. Fish is throw out of the shredder fast and into the water, he runs the sweepers but flies off fast; though swims really fast. On the gears he hits the platform and is back in the water; he then makes it right under 2:00.

Last up is Alex Gross, he falls of the shredder fast and moves on to the sweepers; he was close to recovering but hits the water hard. Now at the gears he just fell into the water; the winner of this week is DJ Fish Food!